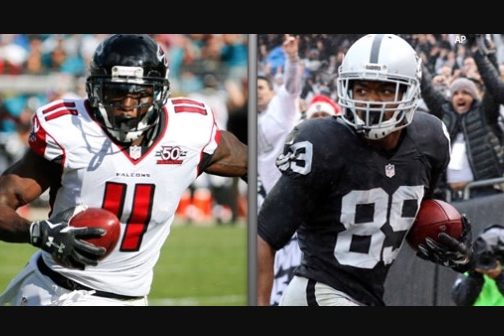 It’s time to begin thinking about our fantasy football leagues and player rankings. The summer months are upon us and fantasy drafts are only weeks away. This article focuses on the best fantasy options that have played for Nick Saban at the University of Alabama. You could arguably win your league with an all Alabama lineup if there was a viable quarterback option.

#1. Julio Jones WR Atlanta Falcons​-2016 stats: 83 rec, 1,409 yds, 6 td- Jones is in the debate for the best overall receiver in the NFL. His numbers dipped slightly from 2015 with the addition of Mohamed Sanu and an overall more balanced attack from the Falcons. Though durability is sometimes a question, he has played in at least 13 games every season except for the 5 he played in 2013 which ended with a fractured foot. Jones finished 2nd in receiving yards yet finishing in a tie for 17th most receptions. The league leader in yards per game, Julio Jones is sure to be a 1st round pick in your draft.

#2. Amari Cooper WR Oakland Raiders​-2016 stats: 83 rec, 1,153 yds, 5 td- Cooper’s stats are not that far away from Julio. He has played in every game as a pro and is Derek Carr’s go to guy. Fantasy owners would like to see more touchdowns but yards and receptions both increased from 2015. With the consistency of 70 plus receptions, 1,000 plus yards, and at least 5 touchdowns, Amari Cooper should be taken somewhere in the 2nd-3rd round of your draft.

#3. Eddie Lacy RB Seattle Seahawks​-2016 stats: 360 yards, 0 td, 4 rec, 28 yds, 0 td- Lacy will run behind a new line this season in Seattle. That may not be great news. The Seahawks finished 25th in rushing yards at 99 per game. He figures to take the starting job immediately assuming he loses the right amount of weight and has fully recovered from the ankle injury that led to his 5 game season in Green Bay. Before the 2016 season, Lacy had missed only two games in his previous three seasons. In those three relatively healthy seasons in Green Bay, he scored 23 rushing and 6 receiving touchdowns while totaling almost 4,000 all purpose yards. He will be labeled as a high risk high reward draft pick. If Lacy returns to form and Seattle improves on the offensive line, he could sneak into the top 10 of fantasy backs. Lacy will probably be selected somewhere in the 4th-6th round range unless a homer in your league selects him in the third.

#4. Mark Ingram RB New Orleans Saints​- 2016 stats: 1,043 yds, 6 td, 46 rec, 319 yds, 4 tdAfter eclipsing 1,000 yards and scoring 10 touchdowns for the first time in his career, it appears Ingram is in his prime. So what do the Saints do? Sign free agent Adrian Peterson and draft Alvin Kamara. The addition of those two backs mean a running back by committee approach. Ingram could see short yard and red zone work disappear to Peterson and passing down plays may be lost to Kamara. Add that to Ingram missing at least 3 games in four of six seasons and you get a 4th-6th round fantasy pick with limited upside. A safe bet to produce weekly but his totals are likely to dip.

#5. O.J. Howard TE Tampa Bay Buccaneers​- Howard will be an unknown entering the fantasy scene. Alabama did not feature Howard in their offense as an explosive playmaker. Playing with Jameis Winston will give him more opportunities down the field and across the middle. Cameron Brate is Howard’s only competition for tight end targets. The rookie tight end should be able to get close to matching Brate’s production last season (57-660-8). It would not be shocking to see Howard emerge as a top tier tight end and would be a justifiable 6th-7th round fantasy selection.

#6. Derrick Henry RB Tennessee Titans​- 2016 stats: 490 yds, 5 td, 13 rec, 137 yds, 0 tdHenry is still waiting patiently behind Demarco Murray after his rookie campaign. Murray basically tripled Henry in touches and is likely to at least double him up this season. Henry isn’t much of a threat out of the backfield to catch the ball so his value lies almost exclusively in standard leagues. Henry may produce enough in a favorable matchup to start a flex but is likely only useful week to week if Murray goes down to injury. There is a chance Henry begins to outperform Murray and increases his workload as the season progresses. He is a low risk high reward pick in the 6th-8th round range.

#7. T.J. Yeldon RB Jacksonville Jaguars​- 2016 stats: 465 yds, 1 td, 50 rec, 312 yds, 1 tdYeldon’s fantasy stock took a huge hit when the Jags drafted Leonard Fournette 4th overall. Fournette figures to be the starter immediately with Chris Ivory handling short yardage and goal line work. Yeldon will more than likely still be used heavily in the passing game, giving him a bump in PPR leagues. With at least 3 mouths to feed in the backfield, Yeldon should not be drafted until the 9th round or later in fantasy leagues.

#8. Kenyan Drake RB Miami Dolphins​- 2016 stats: 179 yds, 2td, 9 rec, 46 yd, 0 td- Drake is what I like to call a NyQuil deep sleeper. His success is more likely to come on a special teams play because of the Dolphins running back situation. Jay Ajayi will be the lead back and Damien Williams figures to at least split carries with Drake. Drake’s fantasy relevance as of today isn’t much but an injury to Ajayi would make him serviceable. Drake will go undrafted in many fantasy leagues unless an Alabama or Dolphins fan takes him.

#9. ArDarius Stewart WR New York Jets​- Stewart left the Tide a year early and was drafted in the third round. There are 4-5 receivers ahead of him on the depth chart and the Jets will likely start Josh McCown at quarterback. Stewart doesn’t figure to contribute much this season unless it’s in a special teams role. He will go undrafted in fantasy leagues unless he becomes a last round homer pick.

#10. A.J. McCarron QB Cincinnati Bengals, McCarron is the only one in this bunch worth considering as a fantasy contributor. However, if he is not traded or Andy Dalton stays healthy all season, the former Tide star should not be on a roster in your league.

An ideal fantasy lineup of all Alabama players excluding quarterback:

Bo Scarbrough and Calvin Ridley are likely to be selected early in the draft next year and be in the mix for fantasy relevancy. Potential future NFL quarterbacks Jalen Hurts and Tua Tagovailoa are battling for the signal caller spot. 5 star talent at the skill positions come in every season. The fantasy talent pool of players from Alabama will continue to grow for many years to come.