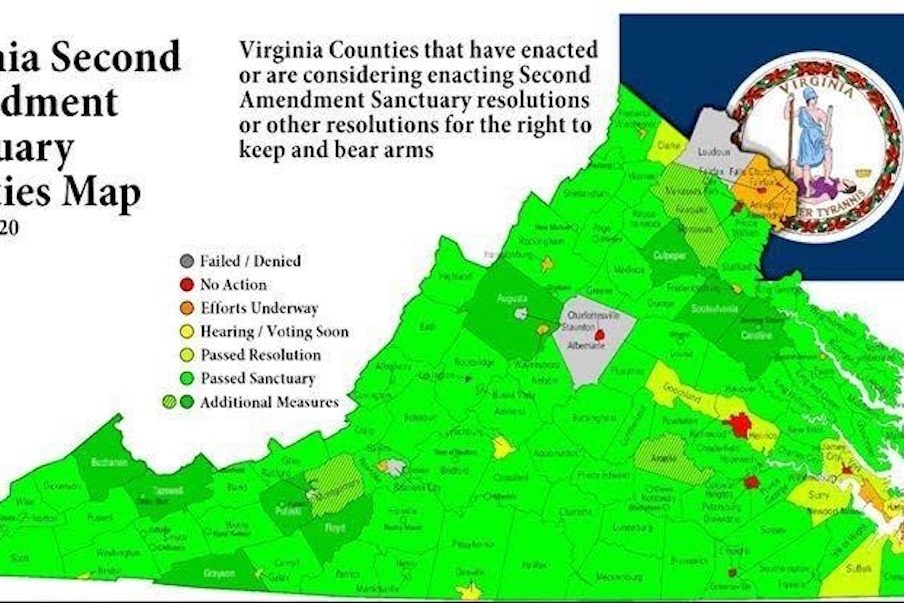 Have a cup of coffee and pull up a chair, this is not a booze moment, this is dead serious stuff.

See that map up there? The counties or cities that have county like status in the Commonwealth of Virginia in various shades of green have passed “second amendment sanctuary status” laws.  Those in yellow are in the process of passing them. The four spots in grey are where they failed. Yes, there are four, but you gotta look real close to see two of them. Oh, and the little spots in red are where no action has been taken.

What’s caused all of this? Well, let me tell you.

First, there’s a law being proposed that would ban the purchase of Semi-automatic Firearms.  Whether or not you would be allowed to keep the guns you already own is still being debated. If you are allowed to keep them you would have to register them. (history has shown that when you register them, a new law within five years WILL require that you turn them in.  It’s happened literally everywhere that this has been done.) The way the law is written a lot of handguns, possibly including most handguns used as issue weapons by police departments all over the world would be illegal.

Additional laws being considered would make the purchase of a magazine holding more than ten rounds illegal, raising the age to buy a firearm to 21, banning “binary” triggers (this is a drop in replacement trigger on AR and AK style weapons that allows a rapid second shot, by firing the weapon once on depressing the trigger, and a second time when you release the trigger.  They have been identified as legal by the BATFE boys) banning outdoor ranges, and any range not run by the state… and the list goes on.

The resolutions are county governments saying “we’re not going to enforce these laws”.  Which doesn’t mean the state can’t send in the state police, or as at least some lawmakers have threatened, send in the National Guard.

Well, here’s the thing.  Most of these laws or variations of them are already the law of the land, in California, New York, or both.  They are backed by organizations run by Mr. Bloomberg, who is a former Mayor of NYC, a candidate running for the Democratic nomination for President, and is and has been one of the richest and loudest members of the Anti-Firearm movement in the United States.  He seems to think that because it has been pulled off successfully (so far) in CA and NY, he can now take it up and down the coasts. (My home state of Washington is currently seeing some of the same proposals show up, some of them even worded identically)

Trouble is, VA isn’t NY, and WA isn’t CA.  New York and California have a much higher ratio of urban and immigrant to Rural and multigenerational American than any of the other states we could look at.

Look, ignoring everything else, the laws they’re proposing aren’t going to make anyone safer in any meaningful way. If you want to look at a really great Data Geek’s data geek report on it, see  https://www.waguncontrol.org/articles/an-honest-conversation-about-assault-weapons-bans?fbclid=IwAR1ckHrM6lkcye-N9WF4dz9CmF-ecPBo7v14yeoiHmTAxiP2Hd-1qwei4d4  The article (until the last paragraph) doesn’t address the second amendment at all, but merely looks at the statistics on crime, to examine “what tools are being used to hurt people” and how often.

Above and beyond that though is the very real constitutional argument.  Urban dwellers are more likely to be willing to swallow the “What do you need” line, and immigrants are as well, statistically.  Trouble is, they’re moving their plans out of their strongholds now. VA went solidly Democratic in the last election, no doubt in large measure due to the big cities, the DC beltway, and as a reaction to the President, accusations of Voter Fraud aside.

Because of this swing to Democrat by the state, they (the elected officials) seemed to think that they finally had a mandate for their agenda. Go back to the top of this article and look at the map again.  I’m thinking they’re wrong.

Once it’s a law, the SCOTUS can step in and say “nope, that’s in violation of the constitution” and the Commonwealth Supreme Court can do the same, because their constitution also makes allowing the public to keep and bear arms a central part of their laws.

Of course, the problem with that, is first the law has to pass, and then someone has to take it to court.  Meanwhile, the elected officials just changed the law on recall elections to make it significantly harder to do a recall, and changed the laws on hearings to require that the attendees be evenly split on both sides of the issue.  This has led to literally hundreds of pro gunners standing outside, while anti gunners are escorted past them into the hearing room, so that we have even numbers of people from each side of the issue.

All of this has made for some VERY pissed off Virginians. A LOT of very pissed off Virginians.  We have seen a couple of times in the history of this nation what that looks like. Governor Northam I beg you, on bent knee, step back.  Do not walk off this cliff. You may get the laws you want passed, but there’s a lot of good ol’ boys out there that are not going to wait for the Supremes to weigh in on the issue. Sir you are a graduate of VMI for Gods’ sakes, I know they taught you some history.  People are coming into your state from everywhere in the union to be part of this. IT WILL NOT GO WELL! This will go to insurrection if it’s attempted to be enforced.

To the various supreme courts involved: I beg you, if these laws pass, for the love of law, and the love of our nation, grant an immediate injunction stopping the enforcement until the laws make their way through the appeals system.  Once the first attempts to enforce a confiscation law goes down it will be too late. The first one, or maybe two will go just fine, especially if it’s done in secret, but after that I expect a massacre, based on an ambush of law enforcement by citizens, followed by a mess that will make the Watts riots, or the Detroit riots in the 60s look like a sandbox fight between toddlers.

We stand on a precipice. The nation is divided almost straight down the middle on this.

One side has urban riots, bicycle locks, ball bats/trash can lids, the police and military that will obey any order given, and the classical media.

The other side has rifles, the police and military that believe “Defending the constitution against all enemies foreign and domestic” includes fighting against what they see as unconstitutional laws, past military training, and the blogosphere.

One side is sure that “history is on their side” and that everyone will go along to get along, except for a few hotheads, and the cops will arrest those.

The other side is sure that “The founding fathers would already be stacking bodies by now” and that they have the numbers and arms to utterly destroy the opposition.

The citizens will not blink and are not bluffing.

Governor, step back from the edge, lest you cause us all to fall, damn it.