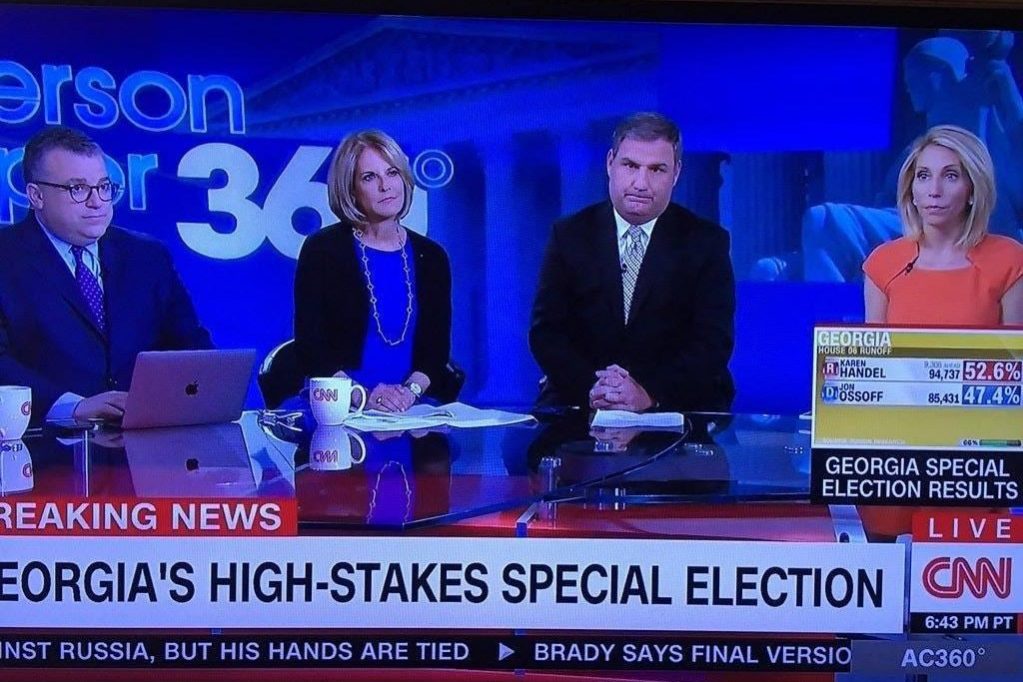 Good morning, and welcome back to The Scuttlebutt. Last week I said that I might have something to say about the baseball shooter, and that’s going to be one of the topics today.

It’s not the only topic, because all of it is inter-related. The press has an agenda. That shouldn’t surprise anyone, and it’s nothing new.  Hell, the press has had an agenda since there’s been a press.  The difference it seems to me, is that it hasn’t been this one sided in a long, long time. I’m sure I’m not the only one around here that remembers all the way back to November when the press was still calling it Hillary’s election, at 9 PM Pacific time, when there were enough votes in that it would have taken a miracle equaled only by the second coming for her to have won.  Then when they finally bit the bullet and admitted that all of their polling and all of their predictions were not just wrong, but catastrophically wrong, it looked like they were going to have a complete and total mental breakdown right on camera.

It was less than a day before the accusations of cheating, and rigged elections started.  Ironic from the same people that had demanded that if Trump and the Republicans lost, as predicted, that “they were going to have to accept the will of the voters”.  Then the vilification started.

Seriously? I really can’t remember this level of hatred coming out of politics EVER.  If I look back far enough in history to the late 1700s early 1800s, I can find it, maybe… (the rhetoric against Bush, and Obama were bad, but not this bad) But there are national names calling for people to use violence to create change.  Well, they got their wish.  Some clown that was a Bernie volunteer in IL. Decided to pack up his stuff, grab his old SKS (by the way, for anyone here that isn’t a gun nut, the SKS is NOT an “assault weapon” as the term is normally used even by the press.  This thing is a 1940s era semi-automatic weapon without a removable magazine, fed from stripper clips like the WWII Garand.) and a pistol, and head for DC.

What was he thinking? I don’t know.  If he left a manifesto, no one has released it.  I can bet that based upon the rhetoric in his social media accounts though, his plan was to be “the hero that brought down the evil Trump regime and restored sanity to our nation by putting the government back in the hands of Hillary”.  Now the very fact that people consider this possible shows that they have no freaking idea how the nation operates, or how the line of succession works.  All of that is beside the point.  The fact is that he painfully obviously targeted republican congressional figures, and he did it in response to the screaming of the left demanding that he “punch Nazis” etc…

Which brings up the next point.  The man had that SKS with a SCOPE, at 130 yards.  That’s about normal deer range, or SHORT elk range.  Let’s not even get into antelope ranges, those are normally 500 yards plus.  He fired 50 rounds!  The SKS is capable of quite adequate accuracy at that range, and in fact out to 500 yards or so.  Yet with all that, he hit 4 people, once each, and at least so far (the congressman is still in the woods at this writing) didn’t manage to get a single kill.  Now am I disappointed that as a gunman he sucked? OH GODS NO.  What I am trying to say, is that the “Antifa” and the rest of those clowns, if he and the others we have seen so far committing violence are examples, are pretty bad at it. Yet they’re trying to drive the nation to that direction.

Within less than a day, Scott Pelley (the CBS evening news anchor, since fired) suggests that the congressman “asked for it”.  Several others on the left have sounded similar cries, of “well it’s self-defense, these evil Republicans are trying to take away my medical care and make me starve in the dark” etc… That’s a problem as a concept.  First, if we go into the victim blaming game, that leads to “she was asking for it, dressed like that”.  We spent a lot of time and effort burying that concept in the dust bin of history, and rightly so.

*This doesn’t mean that you shouldn’t practice ORM (operational risk management).  The prudent individual doesn’t go to the rough side of town, and get drunk in a $1000-dollar suit, and dripping Franklins out his pocket. Nor does a sane individual wear a couple Band-Aids and a G string in that part of town, and get drunk, while rubbing against every big bad biker dude in the place.  Does this mean “you’re asking for it”? NO.  Does this mean you failed your wisdom roll badly and bad things are liable to happen to you against your will? YES.  You were as silly as the 5-year-old trying to walk across the 8-lane freeway at dusk in a dark coat. (that 5-year-old isn’t asking for it either, but it’s probably going to happen anyway)

Let’s take a look up at the picture at the top of the page… WOW. OK:

First, everyone in the media has been predicting the Democratic party was going to take this election, and based on the 20 to 1 spending ratio, they surely should have, if money can buy an election.  Seems that the conventional wisdom that money buys elections might just be wrong.

Second, damn, what happened to at least giving the appearance of even handed journalism?  Now this is an OPED piece. Which means I can, and should be giving you my opinion.  Those folks claim to be News reporters. It looks like someone just ran over their puppy.  Some reporter actually claims that the election was won, because it was raining… Like it only rains on democrat voters, not republicans.

The special elections, caused by President Trump appointing various sitting congress-critters to cabinet positions, have been pushed and pushed HARD by the press as confidence votes on the Trump presidency.  Well, I wonder how long before the retrenchment starts, and the claims that “we never said that”.  Here’s the thing, if those were referendums on Trump, he passed 5 to 0…

What I fear, and yes, I mean FEAR, is that seeing this set of victories at the ballot box, the ctrl Left will double down on the violence card as the only way left to win, and win they MUST, in their heads at least. The rhetoric has become so hardened that they’re drinking their own ink.

Why do I fear this? Because if it goes to violence, our country will never be the same.  I don’t fear that my side will lose mind you. I have been shooting since I was 10. Hunting since I was 12.  Put on a uniform at 17. Wore it for 20 years, and a cop uniform for 10.  I’ve been able to hit a moving target with a rifle at 500 yards or better, and a pistol at 25 in the chest or neck, for a long time, and I haven’t lost it yet.  (oh, I need a scope now, my eyes aren’t what they once were, but I have scopes.) I don’t fear losing, I fear what winning would do to this nation that I love.

I don’t fear it enough not to fight.  The three most horrible things in the world, in order: Winning a war. The only thing worse than winning, is losing a war. The only thing worse than losing a war, is giving up without a fight, when the war must be fought.  Please, I beg you if you’re on the left, DON’T make this a war.  Don’t make this “that politician was asking for it”, because that’s a game both sides will end up playing, and that’s an “Archduke Ferdinand” moment.  No matter who wins, we all lose.

Sorry to bring you all down, but thanks for listening.