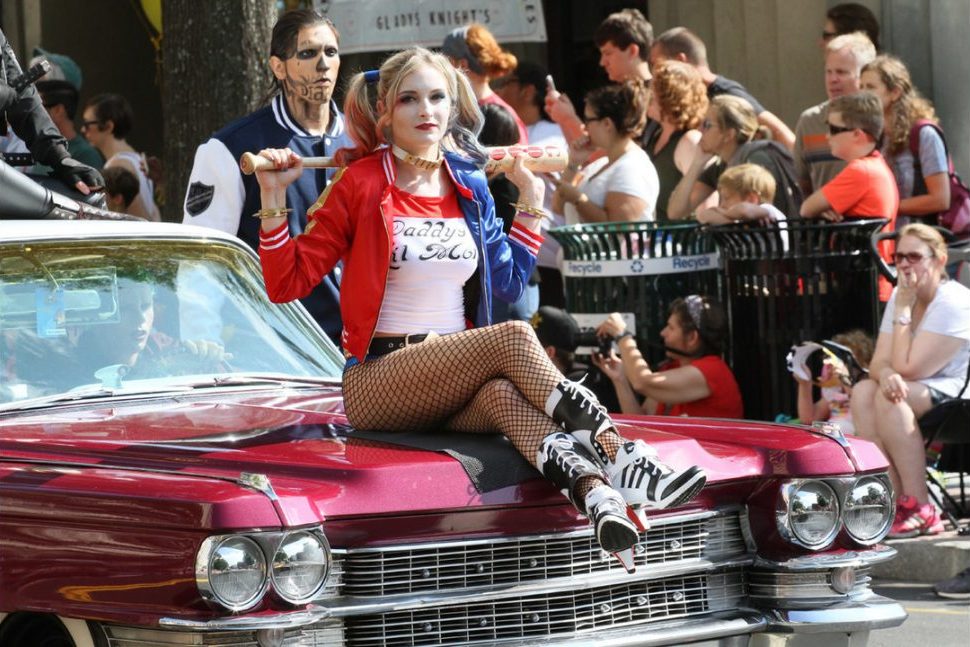 Good morning and welcome back to the scuttlebutt!

Well, I suppose I could talk about the Idiotic little twerp Kim Jung Un and his firecracker, or CNN’s reaction to same.

I’ve been banging my gums about politics and the Navy’s issues and problems enough for a week or two. (Pending something truly stupid coming down the pike.) It’s time to talk about some fun stuff.

Just like they would take away my Shellback and Blue Nose certificates if I hadn’t discussed the problems of the 7th Fleet, so too would they take away my geek flag, if I didn’t give a nod to the 800 LB gorilla in the room, DRAGON CON.

Four days of over 77,000 of your closest friends you never knew before, gathering for “a show with everything but Yul Brynner”.  I think the only reason he’s not there is, He’s DEAD.

If you’re a geek, and you’ve never heard of Dragon Con, please show me your TARDIS or your DeLorean, because you are obviously not from around here.  Five hotels, and basically takes over the city of Atlanta for Labor day weekend.  I mean, it makes that Friday the “black Friday” for the year for the merchants of Atlanta, and the parade that is part of it is as big as the Macy’s Thanksgiving parade.

Alton Brown goes, for Pete’s sake.  The list of who’s been a Guest of Honor reads like a who’s who of Science fiction, fantasy, entertainment, and Nerd culture, and takes side trips to people like Clint Black, and Linda Blair…

Did I go? Well, sadly, no.  It’s the Haj of geekdom, and I will go, one year.  Maybe next year… Maybe my editor will pay me to go and report live… (and maybe monkeys will fly out…) Seriously I’m looking at the panels, and there is no way to attend everything that I would want to attend, even if there was two of me. (and snide comments about the amount of weight I’ve put on since retiring from the Navy are NOT welcome that this point.)  If you get a chance to go, you need to start planning now for next year, it’s that full.

So why am I writing about it specifically? Last year, they started something new.  The Dragon Awards.  These are given to the winners of the popular vote in the following categories: (Science Fiction or Fantasy abbreviated as S/F & F)

Best S/F or F board game,

Anyone can vote on them, you don’t have to be a “member” or pay a fee, or be part of an in crowd.

You are only allowed to vote once.

These awards were created in part, because the old awards for Science Fiction and Fantasy, became so politicized, that the folks who had been running them for years, decided that they would rather vote that no one get an award, than that the “wrong” people get an award.

Yes, I’m referring to the Hugo, and Sad Puppies, Rabid Puppies, and all the rest.  Several years ago, one New York Times bestselling author, who just happens to be a licensed CPA, or was until he realized he was losing money by being a CPA instead of writing full time, (Dwell on that stuff for just a second, I’ll wait.  A long term licensed CPA that’s making more money writing than being an accountant.  I assure you that most authors are not doing that well.  In short, He’s probably one of the top selling authors in the genre.) noted that for the last ten or fifteen years, everyone that won a Hugo, had a particular political bent.

Specifically, they were all preachy leftists.  So, he made a bet, and set out to prove that the game was fixed.

First, they laughed.  Then they Scoffed, then they told him that “these are our awards, why don’t you go make your own award.”  There was a lot of bad blood, this fight went on for several years, and after Sad Puppies four, everyone on the Sad Puppies side decided that they had proved their point.  That was the year, that most of the Sad Puppies, and the competing group the Rabid Puppies (who were more of a “burn it all down” group, vice a “we miss awards given for a well told story, instead of one that passes the Shibboleth tests” group) got most of the nominations.  As a result, they gave a truly record number of “no awards” rather than give out awards to people that they didn’t like.

Sounds rigged to me. Of course the folks that run world con every year, have a different version of events… Go, look at who has won what, and which publisher they all work for.  Read some of the winning work.  If it’s your cup of tea, well enjoy, but then, if it’s your cup of tea, you’re probably not reading this.

Well the folks that ran Dragon Con saw this, and decided to create their own award, which they designed to be big enough that no one could game the system.

This was the second year.

Uh that smaller number?  About twice as many people as are eligible to vote for the Hugo, on a good year, when the puppies were all becoming con members so that they could vote.  It’s way more than twice who voted this year.  If it keeps up, they’ll be able to hold “world con 2020 at a Best Western in Montana, and have rooms to spare.

Best Science Fiction or Fantasy PC / Console Game: The Legend of Zelda: Breath of the Wild, by Nintendo

Best Science Fiction or Fantasy Board Game: Betrayal at House on the Hill: Widow’s Walk, by Avalon Hill

I wish the people that push the Hugos well, I’m sure that for those that like their particular style of S/F&F, the Hugo will remain a symbol of quality.  Me, I like good stories, well told, instead of gimmicky bullshit with no pronouns, trying to proclaim that it’s “the new wave” in S/F.

But then with very few exceptions, I’ve been avoiding anything that got an Oscar in the last 10 years too, and for the same reason.  Your mileage may vary.

Thanks for stopping by, see you next time.