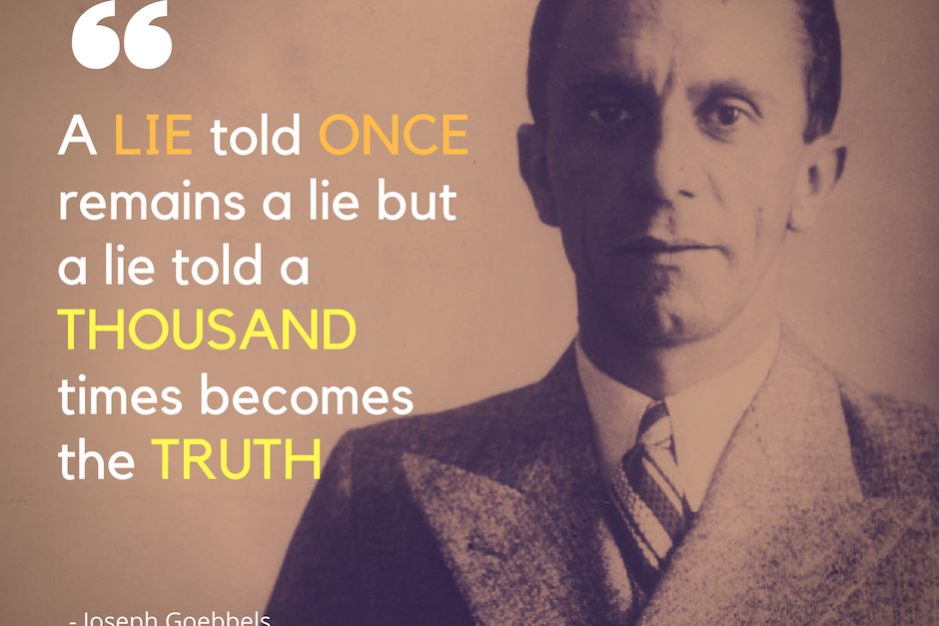 Here, have some something strong, you’re going to need it.

Dr. Goebbels said that “it’s the absolute right of the State to supervise the formation of public opinion.”  Well, it seems that this right is farmed out to Mr. Zuckerberg, and the people who run YouTube, etc.… these days.

So first, if you don’t know who the hell Goebbels was, get your ass on to Dogpile, or Bing (google will probably say that he was a hero to the masses)  And get educated. Then go find your history teachers, yes, all of them… and slap them into next week. Go ahead, I’ll wait.

Done? Good, now let’s go on.  By now, if you read anything about politics, you know that Eric Ciaramella is the “whistleblower” behind the impeachment bullshit.  Now I’m not going to dwell on this guy’s portfolio much, suffice it to say that this guy has been a close personal friend and protégé to Schiff, Kerry, Biden, Clapper, Valerie Jarrett, et al, and got in the shits for sending them classified Emails while on the National Security Council.  He’s also got ties to Hamas, and Hezbollah through a Yale professor he was a close personal friend of, one Bassam Frangieh (who eventually was too radical even for Yale and got shitcanned. Ironically, Wikipedia and other sources claim he “resigned” from Yale, yet Eric was involved in the PROTESTS against his firing by that school.)  This guy was one of the protesters who were in mourning when President Obama had to turn over the White House to President Trump, and there are pictures of him literally weeping at the event.

Shitty Schiff neglected to edit out his name from transcripts of his questioning when he released them over the weekend, which is how we know who the guy is.

But that’s not the big problem.  I support openness, to include a partisan hack and general political apparatchik questioning whether or not something is legal.

(mind you, I would have fired his ass about three seconds after I got into office, on general principles, at that level, you serve at the “pleasure of the President” and his serving would have brought me no pleasure, but I guess Trump is a bigger man than I am.)

Never the less… My beef is with the dedicated and concerted efforts by the media to make this guy’s name disappear, to take down any mention of his name, to remove any post or editorial that names him as the dick blower er, I mean whistleblower who started this latest witch hunt.  Goebbelsberg has admitted that he has ordered any mention of Eric Ciaramella be deleted, he’s banished the more high profile authors and pundits who mention him, he’s gone out of his way to make sure that we can’t see his name on Fascist Book.  Youtube has taken down the videos showing the transcript, and Schiff has removed the transcript from “docs.house.gov”.

Now I’ll be charitable, and point out that the “whistleblower’s” attorneys are threatening anyone who releases their client’s name to the public… and say that maybe Zuck and the YouTube folks are concerned about lawsuits.  On the other hand, SCOTUS has been very clear that the press (including yours surly) has fairly wide latitude in naming names of “public figures” and that “it’s true” is an affirmative defense. All of which leads toward the belief that it’s not fear of lawsuits that are causing the censorship.  When we note that the mainstream media is also remaining silent on this, well, it starts to look like at least a passive conspiracy. (what’s a passive conspiracy you ask? That’s when there is no “group of shadowy figures meeting in dark rooms” but just a lot of like-minded people who all attend the same cocktail parties, and suck the same cock and tail, all agreeing over foo foo drinks that “it would be better if this happened.)

This blatant censorship has gotten to the point where it has affected the earnings of people I consider my mentors (Sarah Hoyt, for one) who have been disrupted in the contact with Beta readers (that’s someone who does the job of reading an unpublished manuscript and providing feedback prior to final edits).

Mr. Zuckerberg, if Fascism, and thought control is not your goal, if the free exchange of ideas, and letting the people decide the truth of things is actually part of your value system, TEAR DOWN THAT WALL!!! Quit editing what people see, in order to “control the narrative” because if it walks like a Minister of Propaganda, and talks like a Minister of Propaganda, it’s not a duck, it’s a wanna-be Goebbels.

Well, so much for my planned review of Midway… Look for that next week, if we don’t have more insane bullshit from D.C. that distracts me.  If it does, the short-form version of my review: go see it, you will not be disappointed.

People, keep your powder dry, it’s getting shifty out.