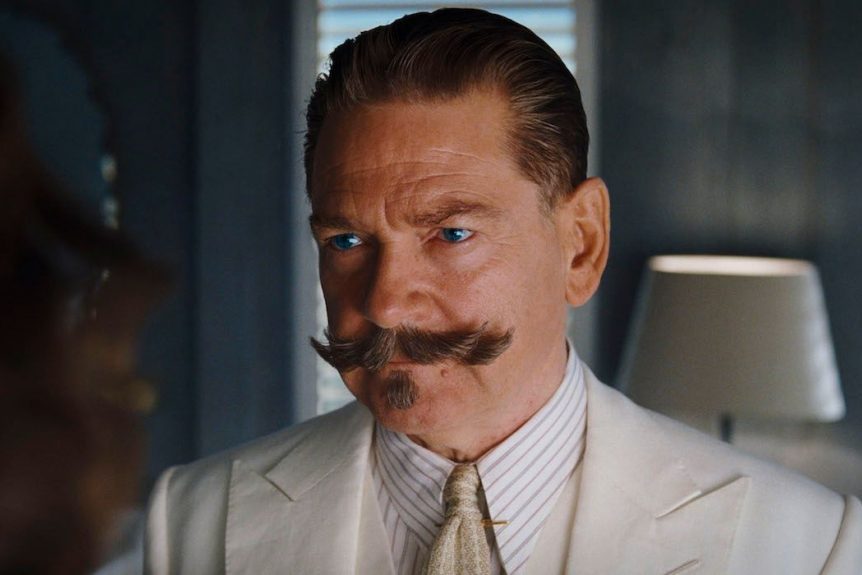 Welcome back to the Scuttlebutt, pull up a chair.

OK, I’ll admit the title for this week was a cheap shot.  I try to keep the titles short, for name recognition, and the ease of my editor’s life, but while I want to give a review of “Death on the Nile” that’s not enough to fill a column; and besides, I do have other things to talk about.  SO, let’s begin.

First, let’s talk about the movie.  Peter Ustinov was the guy I always recognized as Poirot.  I have read most of the Poirot books at least once, (I know I’ve missed some of them, there are over 80 of them!) and I really enjoyed his take on the character. I never watched the TV series with David Suchet, so I can’t compare his take… BUT, as far as I am concerned, Poirot looks like that guy up in the picture now.

Kenneth Branagh is a fantastic actor and director, his Shakespeare works are what brought me to admire his work in the first place, and period pieces are where he shines.  The critics (especially the Agatha Christie purists) hate this piece, which was my second clue that I would probably like it.

The intro explanation on “why Poirot wears that ridiculous mustache” works for me.  In my opinion, the added little piece defines the character nicely.  Both this movie and the Orient Express start from the suspicion that the audience does not know who Poirot is, a reasonable belief in today’s world.  When Christie was writing, anyone who read knew who Poirot was, so she didn’t need to introduce him.

I found that the opening expositions of “who is this Poirot guy” did more character development, more economically, than most movies ever manage.  The only parallel I can think of for complete character definition in a small package was when Han Solo is introduced in “A New Hope.”

As for the changes in the plot and movie: Let’s see how much you screamed at the changes in “The Hobbit” when they made the movie. They added entire plot lines to that piece, and the critics didn’t care.  OK, to be honest, I didn’t much care either, because while it wasn’t what Tolkien wrote, it fit; and if I can let them change Tolkien, then they can let them change Christie.

The cinematography was beautiful, the acting was first-rate, I give it five bullets.

I’m going to start with the press.

What we’ve heard, if we heard anything, about the Trucker convoy and Trudeau, is that “truckers are evil,” “freedom is not what they’re really asking for,” “right-wing violent insurrection, Canada’s 6 Jan. REEEEE!”

What we haven’t heard much of anything about is the one and ONLY violent assault in this whole mess.  David Alexander Zegarac, 42, of Headingley, Manitoba, Canada, a proud ANTIFA member with a long history of left-wing militant actions, who ran his Jeep Patriot through a group of “Freedom Convoy” supporters in Winnipeg then took off at high speed, running multiple red lights.

Does this sound familiar?  Didn’t we have something like this a couple of months ago in Minnesota? (Hint, yes we did!)

This particular douche is also a kiddy diddler, with a 13-year-old.  Yet we don’t hear anything about him, or his crime, Trudeau has remained quite silent about this shmoo, and the press is following suit.

I would find it funny, if I didn’t find it so damn sad, that in this case, like in the Waukesha Christmas parade mass killing, the various BLM riots, arson attacks, etc… The only time we hear about it in the press is if the victims fight back.

We do however hear from the press that they are SHOCKED, SHOCKED I SAY! That the protesters at the Freedom Convoy are treating them like the enemy:

Overheard by a photographer and ENG Cameraman for CTV Aaron Reid “I’ve been a cameraman for other 40 years, and I’ve never seen anything like this.  Usually, during a protest, they used to understand the power of the media and grant us prime locations to film it. But this is different. Now they see us as the enemy!” (quote Feb 10, 2022)

Well, here’s the thing: when you choose sides, when you give up objectivity in pursuit of an “agenda,” you don’t get to be surprised if the people you are lying about in order to achieve your goals, don’t particularly LIKE you.  The Jig, as they say, is UP.  The mask has come off, and what was obvious to those of us that had been at things reported on, who seen the way facts were distorted, information was omitted, and lies were told, is NOW obvious to everyone that doesn’t have their head so far up their fourth point of contact, that they can give themselves a colonoscopy by merely looking around.  The Press is NOT an objective reporter, “factual reporting” is as dead as last week’s grocery store sushi.

Meanwhile, Trudeau is doubling down on heavy-handedness.  Look, for those of us who remember, even vaguely, how his “daddy” dealt with the defining crisis of his days in office, this is no surprise.

For those that actually listen to what this little pimple on the scrotum of the body politic has said, such as: “There’s a level of admiration I actually have for China. Their basic dictatorship is actually allowing them to turn their economy around on a dime,” the concept that he would go for totalitarian tools instead of democratic tools is no shock.

That leaves us with where we are, with an “emergency powers” act (this used to be called the “War Powers Act” and was only used in time of war, but then daddy used it against the Qubequa in ‘70 so they changed the name.)  The Emergency Powers act allows said pimple to revoke the civil rights of his citizens, in order to quiet “rebellion.” And again the press is continuing to carry water for him.  To make this even better, Toronto Dominion Bank has elected to freeze the accounts of truckers, to the tune of 1.1 million bucks, and will be “giving this money to the courts.”  Remember, it’s not theft when the left does it.

I don’t see this going the way he thinks it’s going to go. I would not be surprised to see a vote of no confidence, and a crash election in Canada’s future.  That’s frankly the BEST result I see.  The others all involve blood.

Speaking of blood, and in this case, the waving of the bloody shirt, I see that Remington folded and is paying 27 Mil to the families of Sandy Hook.  This decision is based on the Supreme Court’s refusal to hear an appeal of the settlement.

Now the whole thing revolves around a loophole in the 2005 law that shields gun manufacturers from lawsuits over crimes committed with their guns.  The plaintiffs claim that Remington’s advertising attempted to attract young people, and inspired the killer.  The loophole is that if the advertising was deceptive, or encouraged the sort of crime that took place, then you can sue.  Well, there are a couple of problems with this. 1) No one quoted or showed any advertising that fits the bill, and 2) most importantly, the little fucker that committed the crime DID NOT BUY THE GUN.  He murdered his mother and took it from her gun safe.

What this will do is create a precedent, until, in the end, SCOTUS will have to hear an appeal.  If Remington is liable for someone breaking into a gun safe, stealing a firearm, and using it to commit murder, how is McDonald’s not at fault for the epidemic of Diabetes? Ridiculous I know, but there it is.

More on firearms, or, should I say Moron Firearms (as in Alcohol Tobacco and Firearms.) I believe I mentioned some time ago that BATF was forced to admit that they have nearly one billion (920,664,765) purchase records on file for people that have bought firearms.  Oh, by the way, since there is about 20 mil. firearms sold a year, how far back do you have to extend records to get a billion of them, collecting only from gun shops that have gone out of business?

Now bear in mind that Congress has passed laws stating that a firearms registry is illegal, and has ordered BATF to cease and desist before when they have tried to create one. Well, the thing is, they require any licensed gun store that goes out of business to forward all their records to BATF.  Current law allows the licensed seller to destroy their records after 20 years.  HOWEVER, Biden is trying to change that law, requiring licensed sellers to maintain their records forever, or until they go out of business, at which time they are required to send them to the BATF, who as a matter of policy NEVER destroys the record.

Of course, BATF says “we never look at those, unless we get a specific request to track a specific gun.”  And if you believe that, I have a wonderful investment opportunity for you, but you must act now, and it must be cash, small bills only, please.

Once again the press is carrying water for the Democratic party, stating that the Gun Owners of America and Ohio Senate Candidate JD Vance, who are raising a stink about this, are “missing content” (USA Today, and Politifact “fact-checkers”)  It’s interesting to note that none of the “fact-checkers” actually work for BATF, they have not talked to anyone who works for BATF, and, OH yes, it seems that several of the “fact-checkers” from both organizations are the same people…

While we’re talking about things like “people that want to take your guns,” and “Politicians that tell you what they really think and then change their tune to get elected,”  I give you Gubernatorial candidate Beto O’Rourke:

“I’m not interested in taking anything from anyone. What I want to make sure that we do is defend the Second Amendment.” —Texas gubernatorial candidate Beto O’Rourke, February 2021

And finally, to round out the gun grabber set of the week, we have a BLM and Gun Control activist Quintez Brown, who just attempted to shoot Louisville Mayoral candidate Craig Greenberg with a gun.  Yeah, you read that right.  To make it better, Mr. Greenberg is also anti-gun.

Mr. Brown (21) is a Black Nationalist who has called for “The total liberation and unification of Africa under Scientific Socialism” and was championed by former President Obama, and Joy Ann Reid (a well-known leftist commentator) as well as being a writer for the “Courier-Journal.”

I tell you folks; you can’t make this shit up.  I don’t know what set Mr. Brown off, other than being completely brain dead, but fortunately, he’s a shitty shot.  Several rounds fired at close range, and the best he got was a hole in Greenberg’s jacket.  I think this is actually why the left wants to make firearms illegal, they KNOW that if they had guns, they would go around killing people, and projection being what it is, they figure that’s how we are too.

Well, I think this is about long enough, so I’m going to let you all get back to whatever you need to do.  There will be no column next week unless my editor wants to run one of my back issues again… I’ve been doing this for about four or five years now, so he might find something relevant.  I’m going to be in Cancun for a week and trying to avoid the news.  See you all on the flip side.