Controlled Violence, or Pistols and Other Things That Go Boom. 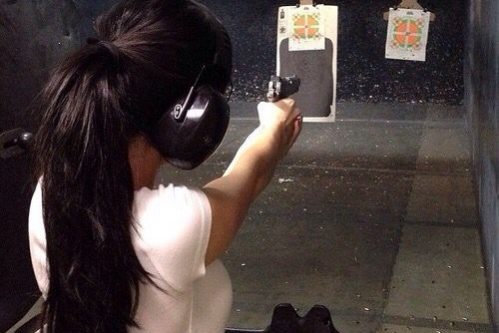 Various friends of mine and family have come to me over the years to ask questions like “what type of pistol should I buy? Should I have a shotgun in the house?” and variations on this.

Seems some folks think I know a bit about the subject. Well after carrying a firearm for nearly 40 years, much of it for pay, I suppose they’re right. I was a cop for 10 years, and in the military for 20. I’ve owned my fair share of weapons and though my ankles and knees are not up to copping any more, I stay in the loop. I have drawn a weapon in the line of duty (cop and military), to the best of my knowledge, I’ve never shot anyone.

Many of these words are not original to me, some of them are paraphrases of the greats (Col. Jeff Cooper etc.) much of it is distilled wisdom that I’ve picked up from guys that REALLY know something.  So, you want to join the members of that most unique society, those that are willing to take personal responsibility for their safety? OK, here’s the rules:

First rule is: Will you actually be willing and able to shoot someone in the head or heart, and watch them die before your eyes, maybe while wiping the blood off your face? (Most gunfights happen at >10 feet) If the answer is no, you shouldn’t carry. A weapon is not a magical talisman that you can whip out of your pants or purse and speak the magic words “I have a gun” and make evil be banished. You’re going to have to be willing to USE it. Now most of the time that you pull a handgun, the bad guy will suddenly realize he had an appointment across town that he’s now half an hour late for. But bad guys are animals. Like animals they can smell a bluff. You go waving that Tacticool SIG with the laser sights, extended mag, in 45, with the trigger job, the flashlight and a fucking bayonet in their face expecting to scare them, being not actually willing to USE it, you just gave them a high dollar gun with a lot of stupid shit on it…Oh and of course, your life, because they will kill you. Without that gun, they will probably kill you too, but at least you will not have added to a bad guy’s arsenal.

I understand that some folks are just mentally incapable of taking a life. OK. If you can’t, you can’t. Stay with someone who can. Or know that you take a very small but existing risk of being robbed, raped, and then killed. If you would rather be a martyr to the cause of nonviolence than a survivor who now faces talking to the cops and maybe going through a court case to defend yourself, cool. Stop reading now, the rest of this is not for you.

Did they leave yet?

Good. I don’t understand that sort of mindset, but I know people, even people that I care about that have it. I view them the same way that I view friends of mine that have a self-inflicted incurable illness, and are doomed to die of it. The rest of this is for those of us that have decided that it’s better to be tried by 12 than carried by 6.

Second rule is: all guns are loaded, always. Unless you personally checked it, know it’s condition, and have not let it out of your hand since that time, it’s loaded and there’s one under the hammer.

I had a situation with a pistol that I knew was loaded, I always kept it loaded. What I did not know is that my roommate had taken it to the range, and reloaded it after, and put all six rounds in. that meant the round under the hammer was live. My thumb slipped off the hammer and I had an accidental discharge, because I DID NOT CHECK IT. NEVER ASSUME WITH A WEAPON.

Third rule is: never put your finger in the trigger guard until your sights are on the target.

Fourth rule is: never cover anything with your muzzle that you are not willing to destroy.

Fifth rule is: Carry the biggest caliber that you can comfortably control. If the best you can control is a 9MM, I’ll tell you what to buy to load it with. There are a few (very few, but a couple) brands and types of ammo that are effective man stoppers out of a 9 sillymeter. (if you can’t handle the recoil of a 9MM, start working out, because anything less than that, while they will kill under the proper circumstances, hitting a moving target the size of an eyeball, while scared out of your gourd, and trying to stay alive isn’t something an amateur can do. If you can hit a man in the eye or the bridge of the nose, or the throat, while he’s trying to stick, shoot or bludgeon you to death, you don’t need to read this, you’re an assassin) But that being said, the prudent pistolero never gets in a gunfight with a caliber that doesn’t begin with a 4. (40S&W, 45acp, 45lc,45gap, 44, 41. or the two exceptions to the rule, the 357 and the 10MM)

Go out shooting before you buy a pistol. Shoot a lot. Shoot a lot of different types. If you know someone who owns a weapon, and you buy ammo, and find a place to shoot, they will let you shoot their weapon, Hell most of us love an excuse to go out to the range. Here’s an open invitation, you buy my ammo, you find a range near enough to where I live that we can go shooting on, and a weekend that I’m not spoken for, I’ll take anyone who reads this out and you may shoot any firearm I have except my dad’s Winchester which no one shoots. After you shoot a lot, you’ll find something that fits your hand, and that you can shoot comfortably. Buy one just like it. Spend the money to buy a GOOD weapon, you’ll have it for life.

What else can you say that about? You buy a decent handgun, by any of 20 or 30 different makers, give it a modicum of care, you will hand it down to your kids…Who will hand it down to their kids…etc., and it will maintain value better than anything other than maybe gold, that you can buy.

Finally, never plan to get into a gunfight. Pistols are fire extinguishers.

Likewise, If it all goes pear-shaped right in front of you, you use a pistol, cause it’s small enough to have on you, just in case something goes bad. If you go into an area expecting trouble, carrying just a pistol, you’re an idiot.

First why are you going into a place expecting trouble? You’re not a cop, or a soldier so it’s not your job to do that. (those reading this who are soldiers or cops, already know this and follow the second part)

Second, if you’re expecting trouble go in with a shotgun or a rifle, and a pistol at your side, bring all of your buddies, and their shotguns or rifles. If possible have air cover and artillery support.

Remember the only fair fight is the one you win. Chivalry is for competitions and the list field. In war, whether declared or street, when life is on the line, giving the bad guy an even chance is a good way to end up dead.

And unlike the SCA Warfield, tournament field, or a horror movie, if you die on the street, you don’t get up and say good shot, then go and have a beer. Your kids get to squabble over your inheritance, and I have to go to your damn funeral. I hate funerals, except the funerals of my enemies.

Go with God is nice, Go with Colt insures you won’t have to explain to the divine why you’re early.