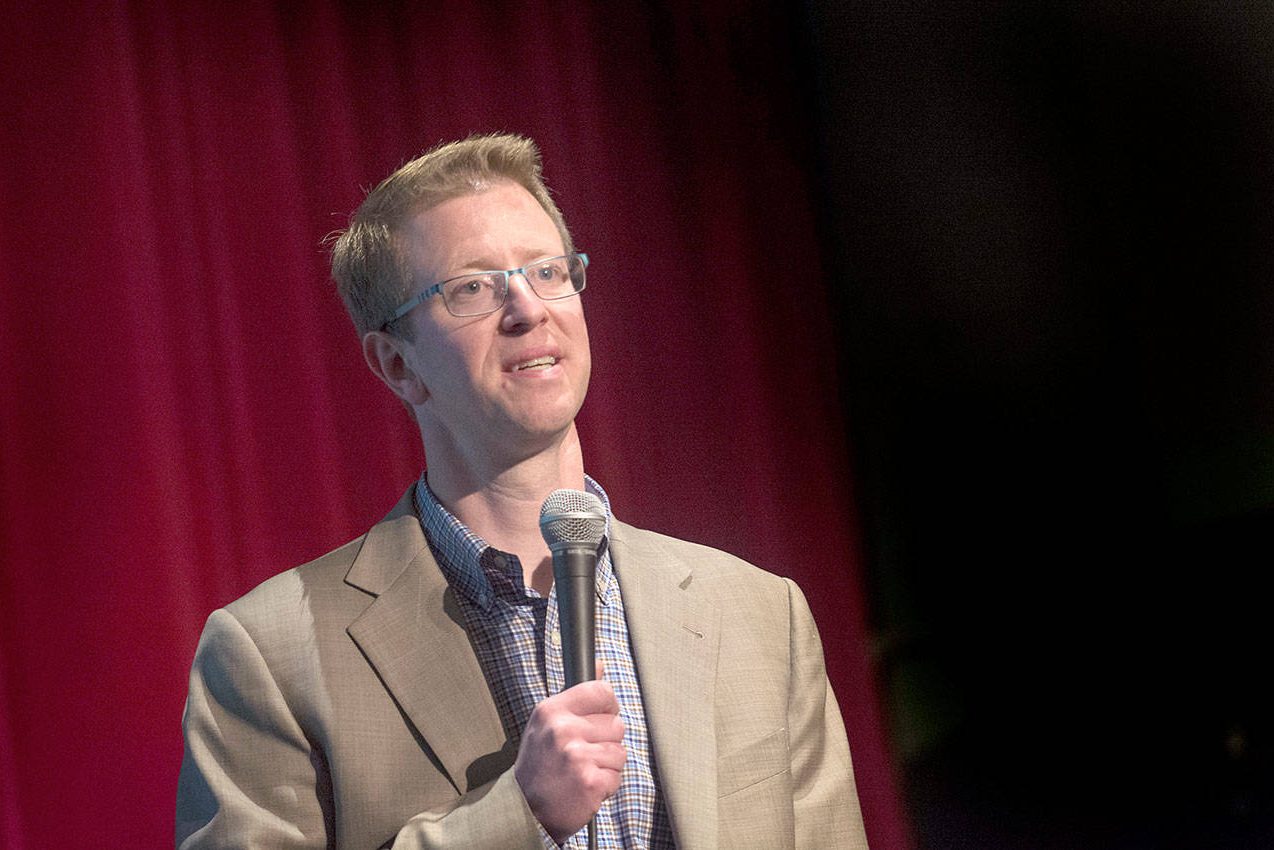 Welcome back to the Scuttlebutt, pull up a chair and let’s talk.

I have to start this week with a very small retraction on last week’s column. After talking very briefly on Saturday last with one of our team that had been doing the phone calls (they got caught up in all of the flight cancellations, and since they had an extra day, went to the Udvar-Hazy center at the Smithsonian, and we ran into them there.) it seems that Maria Cantwell was one of the last minute additions, literally arranging something at 1600, when we had to stop at 1630.  Still, that puts her ahead of our “OTHER” senator, may she find herself replaced in November, and ahead of most of the congressmen in our delegation.

I don’t have details yet on how worthwhile the conversation was, more to follow.

On a related note, if you read last week’s spot, you know that one of our congressmen, Derik Kilmer, seen above) and the only one to meet with us personally, had just been appointed the Chair of a select committee on modernizing Congress.  While my version of that would result in a lot of unemployed individuals, some of them serving time, he’s obviously not able to do that.  What he’s come up with instead, looks like a good first step. Here’s the article on it: https://fedmanager.com/news/proposed-bipartisan-bill-aims-to-improve-government-efficiency-save-taxpayers-money

The short form, for those too lazy to go read the whole thing, is that the bill would require the GAO (Government Accountability Office) to report formally to congress about the most urgent and unmet recommendations to streamline government.  It includes the following action items:

Organize all open priority recommendations into one succinct report to be sent to members of Congress and relevant committees;

Indicate how long each priority recommendation has been unanswered;

Incorporate the estimated costs for unimplemented priority recommendations, as well as anticipated savings from implementation; and,

Assess any additional Congressional oversight actions that can assist agencies in implementing open priority recommendations and resolving any underlying concerns.

The big piece of this is that it will also be public domain.  This will allow you and I to see what the GAO says is messed up, and how long they have been telling congress that it’s messed up, and what congress has done about it. (Usually, nothing.)

This, by itself won’t fix it, but it’s a start.

While we’re talking about cleaning up the various messes in the world, if, somehow you missed it, Elon Musk just bought the largest single block of stock in Twitter.  This is noteworthy on several levels:

First, the stock in Twitter went up 27% in a single day when he bought in, which should tell you that there’s a lot of people that think he’s going to do something different, and that it will improve Twitter’s bottom line.

Second, this is a guy who’s been so exasperated at Twitter’s management, and their censoring of various people, that he had been speculating about coming up with a competing platform.  Instead, he bought a seat at the table.

Third, a large number of Twitter employees bailed out, the second he bought in. Mostly leftists who were part of Twitter’s “Review and acceptable speech” section… It’s worth noting that Musk also has 80 million people that follow his Twitter account, and GOSH, I don’t think they’re going to be able to gag the guy that owns the biggest voting block of their stock.

His Tweet when he bought the stock: “Oh, hi. LOL”

Now the current CEO (Parag Agrawal) of Twitter claims to welcome Musk to the board, as a “passionate believer and intense critic.” However, he’s also been quoted as saying: “Our role is not to be bound by the First Amendment, but our role is to serve a healthy public conversation and our moves are reflective of things that we believe lead to a healthier public conversation.” (In short, we’ll decide what you get to hear, and if we don’t think it’s “healthy” we’ll ban it.)

Compare and contrast that with Musk’s statement: “Wokeness … is a prevalent mind virus and arguably one of the biggest threats to modern civilization. So, do we want a humorless, a society that is simply rife with condemnation and hate basically? At its heart, wokeness is divisive, exclusionary, and hateful. It basically gives mean people a reason, it gives them a shield to be mean and cruel, armored in false virtue.”

Somebody pass the popcorn; this shit is going to be epic.

In other pieces of cleanup news, the saga of the president’s crack-smoking son, who is somehow, in spite of no training, and no qualifications, a paid part of the board of directors to two foreign-owned energy companies (one a Russian sympathizing and controlled company based in Ukraine called Burisma, the other based in China, who paid Hunter and his brother $4.8 mil. This came out in Discovery by the Grand Jury) continues.  There’s a Grand Jury out of Delaware that’s deciding what to charge Hunter with, and the damage control out of the Whitehouse is getting more threadbare by the second.  Biden has lied repeatedly about this, including things like: In 2019, Fox News’s Peter Doocy asked Biden about any conversations he had with his son about business. Biden stated such conversations never happened.

So, there are two problems with that statement:

One, he’s now stating “Hunter never broke any laws.”  Well, Gosh Joe, how do you know that if you have never discussed these dealings with him?  Which is it, did you discuss it and determine no laws were broken, or do you have no knowledge of anything he did?

Two, there are pictures of Joe, Hunter, and Hunter’s business partners out on the links, golfing together, and one of those partners, Tony Bobulinski has testified that he and Joe had meetings together, facilitated by Hunter.  This may just be the piece that takes Biden out of office, which means that Gods help us, Hooker Harris would become president…

Still more fun, Meta (Facebook) got caught by the Washington Post, having hired a professional political consulting firm to run a smear campaign on Tik Tok.  It seems this went far enough as to blame Tik Tok for false rumors that originated on Facebook…  Well, considering that FB lost $300 BILLION in market value this year, I understand their concern, but:

OOPS.  This seems to me to be something that the SEC and the rest of the federal investigations groups ought to be evaluating, to determine if laws were violated.  I’m not sure there’s a law against this sort of shit, but if there isn’t, there ought to be.

Finally, we have Ukraine.  I stumbled across an article recently that I believe is the most comprehensive evaluation of the current conflict and its probable resolution, to date.  Rather than try to give you extracts, and such, I’m just going to suggest you go read it. https://www.quora.com/Whats-the-likeliest-outcome-of-the-Ukraine-Russia-crisis/answer/Matt-LeBaron

Mr. LeBaron seems to have summed it up nicely, and I believe he’s nailed it.

Oh, by the way, went to see Shun Yun last weekend.  Kiti (My wife, who wanted to go) loved it.  I found it to be the most expensive show I have ever slept through. At over $200 a seat, well, I can’t recommend it.  It made my wife happy on her birthday, and that was the goal, but, yeah, please, save your money.