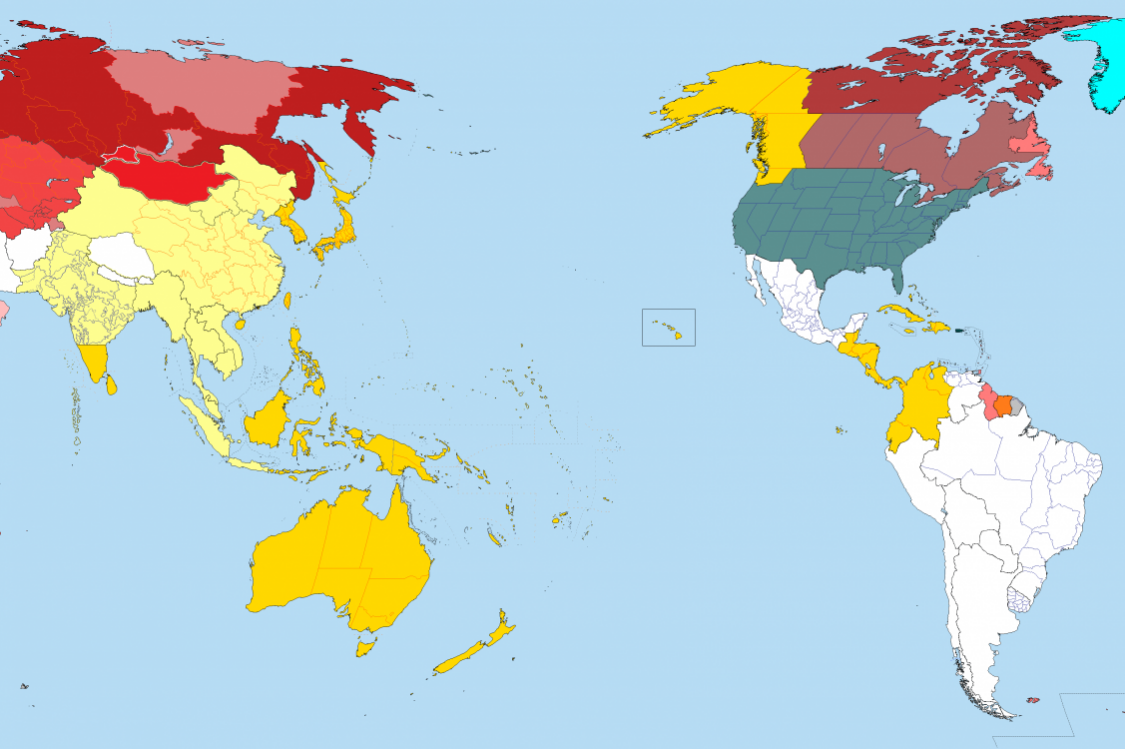 Welcome back to the Scuttlebutt, pour yourself something, have a seat.

Welcome to 2022 (or will be soon, I’m not sure when this will go live.)  Yes, I know that this is not the Chinese New Year, but this may be the year China takes over the pacific.  That map above is the planned “Greater Southeast Asia Co-Prosperity Sphere” as envisioned by Imperial Japan in the late 30s, (in yellow) and seemingly as envisioned by China now.

Look I know this is going to come off as alarmist but let’s take a look at China’s behavior of late:

Hong Kong just had the first elections after the new rules took effect, allowing only “Patriots” to run for election (hint, Patriot, in Chinese translates as “Party Member who kowtows to Beijing”.)  Literally the only avenue left for the citizens of Hong Kong to display their displeasure, is to NOT VOTE. And they did just that, less than half of the voter numbers from 2019 showed up to vote in this pretend election.  Just as a reminder, China signed a treaty during the return of HK to keep their “special status” until 2047… This is how China keeps their word.

China just paid a Washington DC radio station $4.4 mil in a contract that according to the station: “Virginia-based Potomac Media Group detailed its lucrative contract with the Communist Party’s International Communication Planning Bureau in filings last Thursday with the Justice Department. As part of the deal, Potomac Media’s WCRW, an AM station, airs content from China Global Television Network and a series of talk shows that portray China in a positive light.” Further: “Potomac Media’s filing with the Justice Department provides extensive details about its arrangement with the International Communication Planning Bureau, an arm of the Communist Party’s Propaganda Department. The Planning Bureau can review broadcasts and verify programming, according to the contract. Potomac Media is required to provide the Planning Bureau with reports on audience reach, feedback, and “evaluation from international organizations.” They (the Potomac Media group) are now required to register as a Foreign Agent of China.  https://freebeacon.com/media/ccp-paid-dc-radio-station-4-4-million-to-broadcast-propaganda/

Peng Shuai, the female professional tennis star that accused a party member of sexual assault?  You may remember that immediately after she made those accusations she suddenly disappeared.  Well, she resurfaced on the 19th, claiming that she had never said that, it was all a big misunderstanding and miss translation, she’s fine, she never disappeared, and she’s always been very free, thank you very much!  Reuters is carrying the mail for China in this article, but if you read between the lines, you can figure out what happened: https://www.nbcnews.com/news/world/chinese-tennis-star-peng-shuai-denies-assault-allegation-video-questioned-n1286295

Look, as an old cold warrior let me explain something to you.  When someone from a totalitarian regime is too public to disappear and says something that the government doesn’t like, one of two things happen: Either they have a horrible auto accident, or after a couple of weeks in a lockup, having things explained to them in very painful ways that don’t leave marks, they agree to recant and be a good little boy or girl so that their mother and father don’t get fed to wood chippers (feet first.) I’ll lay odds that Ms. Shuai is never seen outside China again without her handler within fast arms reach.

The PLA (People’s Liberation Army) has been building new missile silos like they were tiny houses for the homeless, and now has doubled their C^4I (Command Control Communications Computers and Intelligence) facilities at their primary base, the Numian Facility (this in an article from the Center for Strategic and International Studies… and on that note, Hi Chinese Ministry of State Security, fuck you, Mao was a baby rapist and a pervert who should have been hung.)

Of course, China has been conducting espionage both corporate and strategic for decades, (legitimately, they do not differentiate between the two.  Since the PLA owns most of their industry, the corporate IS strategic, and vice versa.) Recently they were caught hacking Australia’s Telecom systems, and using one of their large corporations with an exterior facing front: Hauwei, as a spying platform.  This would be the equivalent of the CIA using Ford or General Motors as a spy service.

They keep getting caught at it too, on November 5 a US federal Jury convicted Yanjun Xu, the Deputy Division Director of the Sixth Bureau of the Jiangsu province MSS of “Conspiring to, and attempting to commit economic espionage and theft of trade secrets” for attempting to steal the designs for a General Electric Aviation Composite Aircraft Engine Fan.  The FBI estimates that Beijing steals $200-$600 billion dollars worth of economic secrets from the US a year. https://www.businessinsider.com/threats-to-the-us-that-fbi-director-is-worried-about-2021-11

But doing the big stuff isn’t enough, for them.  I’ve mentioned Quora here before, the place is literally FULL of Chinese government bots flooding the site with propaganda.  I get seven or eight questions a day about “why the US so stupid, why they fuck with peace-loving China? Don’t they know China will kill them all?”  OK, they don’t exactly say that, but they might as well, with questions like: “Doesn’t the US understand that China will sink two of their Carriers in the opening minutes of a war?” and “Why does the US conduct incursions into Chinese waters, what would the US say if China sent a battle group to the Gulf of Mexico?” (Both of these are real questions I was asked in the last 24 hours.)

They’re even trying to get Tik Tok involved: “The Chinese Consulate is paying Vippi, a New Jersey-based public relations firm, $300,000 to have influencers on Instagram, TikTok, and Twitch promote the Beijing Olympics, according to the disclosures. The influencers will also be required to promote U.S.-China cooperation on issues, including energy and climate change.” According to https://www.dailysignal.com/2021/12/14/beijing-pays-us-social-media-influencers-to-hype-olympics-downplay-boycotts/ It seems that China is concerned, because there are a number of Human Rights advocates that are stating that a Diplomatic Boycott isn’t enough, and we need to completely boycott the Chinese Winter Olympics.

Asia is all about “Face” having the free world boycott their Olympic games would cause massive loss of face.  These guys are so desperate to be seen to be at least as big a player on the world stage as we are, that they completely lost their shit when they weren’t invited to the US Democracy Summit: Claiming that “We are the REAL democracy, the US is a failed state.” https://foreignpolicy.com/2021/12/10/china-response-biden-democracy-summit/ Of course, bear in mind that China’s definition of Democracy is: “The only people that ARE people, which is to say Party Members, have all agreed to this, or are dead, so all you subhuman motherfuckers better do what you’re told if you want to live.”

Seriously, these guys are so desperate to be “relevant” that they bought 1900 memberships to the “World Con” this year, so that they could vote for a Chinese fan group to host the World Con in 2023!  Yes, they actually think that World Con still matters.  Hell, it’s been a wholly-owned subsidiary of TOR for a decade or more, and the last time I went to one, consisted of people that had been going to it since it really meant something in the ’60s and ’70s.  I mean it was full of 70-year-old’s sucking on O2 bottles, on motorized scooters because they were too fat to walk, and pink-haired individuals that couldn’t decide which of the 56 or whatever sexes they were, while they were selling T-shirts that came in “Male” and “Female” …

When you add this to all of the aggressive moves against Taiwan, (which I have mentioned here before.) The way they’re sending their fishing fleets into foreign waters with their transponders turned off, in violation of international laws and treaties, Their sharp elbows in the Spratly Islands, and other parts of the western Pacific… Well, it looks to me like they’re trying to see how far they can go, this side of war.  Frankly, it doesn’t look like they’re much concerned that we’re going to stop them, and sadly they may be right.

At least right up until they kill a couple of American troops, then they’re going to find out that Biden isn’t going to have much choice, the nation will DEMAND war.

I do see a way out, though.

I see the same way out for the mess that is Ukraine. In Ukraine, NATO needs to straight up, quit beating around the bush, and sign them up, placing a multinational NATO infantry Battalion in Ukraine.  It’s really hard for Russia to say “this is a forerunner to an attack” when it’s infantry.  No one uses straight legs in an attack anymore, that’s strictly a defensive unit… BUT it’s a “tripwire.”  To get to the Ukrainian troops you have to attack German, French, Dutch, English, and American troops, and well, that’s a dance you don’t want to start because you just declared war on all of NATO.

For Taiwan, it’s even easier.  FORMALLY recognize Taiwan as a nation, and put a Marine division there for “training” purposes.  Again, to take Taiwan you have to attack American troops.  This strategy has kept South Korea free for the last seventy years.  Don’t for one second think that Kim wouldn’t steam south with everything he has if it weren’t for the American troops on the border.

Yes, it risks a war.  Guess what?  Doing nothing ENSURES a war, or a capitulation, which would be even worse in the long run.  If you don’t believe me, ask Nevele Chamberlin.

Right now I place war with China at a one in three chance in 2022, and if you give me out to 2024 then the odds jump to two in three.  I don’t like it either, but one of the rules of combat is that “The enemy gets a vote too.”