Chicken of the Sea and Ricin Crispy Treats 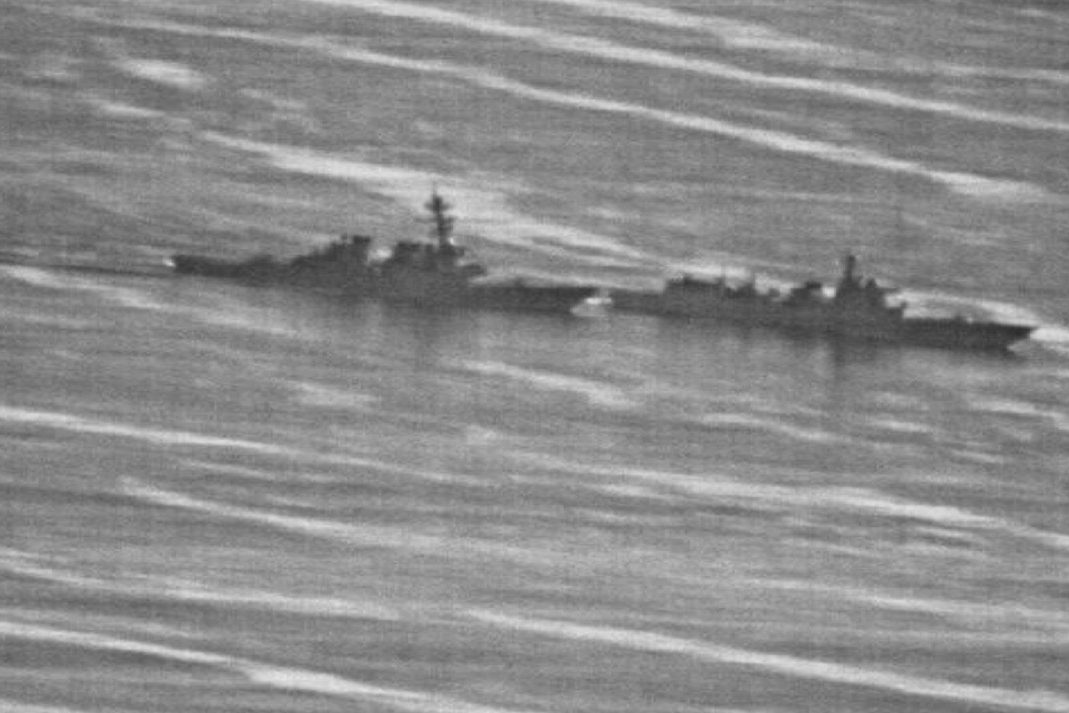 Well, I was wrong last week, Ford did testify, the effectiveness of that testimony is debatable and there’s plenty more that could be said about the whole thing, but I’m going in a different direction today.

That’s because the Navy is back in the news. Up above, you see a US Navy photo of the USS Decatur and the People’s Republic of China destroyer Luyang.  The setting is the Spratly Islands, also known as the Nánshā Qúndǎo, AKA the Kepulauan Spratly, AKA the Kapuluan ng Kalayaan, AKA the Quần đảo Trường Sa.

The reason for all the names is simple.  The islands (well some of them are shoals, others are islands at low tide, still others used to be shoals until the PRC shipped billions of cubic yards of sand and rock to make an island out of a shallow spot…) are sitting smack dab in the middle of the South China sea.  Nearest to the Philippines, (for most of them) or Brunei and Malaysia for nearly as many of them, but also close to Vietnam, and claimed by the People’s Republic of China.

This place has been in the news before and made it to these pages before.  There’re several really good reasons for this. They fall under the broad headings of: OIL, FISH, and SEA CONTROL.

The reason everyone else wants them, is the oil and other raw materials on and under the sea bed, and the fishing rights, which are vital to the economies of the PI, Brunei, and Malaysia, and Vietnam.

China wants them both for those reasons, and because they would expand the “Home waters” IE what is Chinese property, and you can’t come in without their permission, out to such an extent that their water would include half of what is now either Vietnamese or PI water. Plus, it would make it impossible to get to northern Asia (Japan, eastern Russia, Taiwan (which they claim anyway) and the Koreas) from the Middle east, Africa, or Europe via the Suez, without going either through their water with permission, or several thousand miles out of your way.

This is all part of China’s “Great Wall of Sand” as a US admiral titled it, part of the “road and belt initiative” as China titles it.

The US Navy has long held that claiming thousands of square miles of ocean, especially when it includes a natural trade route, and is a thousand miles from your homeland to be, well, not to put too fine a point on it, BULLSHIT.  We do what is known as “freedom of navigation” exercises, to prove that “no mister dictator, or president for life, or premier, or whatever you call yourself, we don’t recognize your claim to this water. What ‘cha gonna do about it?”

That has, over the years, especially during the cold war, wound up in what we used to call (and I’m pretty sure is still called) “Chicken of the Sea”.  IE some other nation, who thinks the sea is theirs, will try to ram our ships “all accidently like”. The old Soviets used to LOVE this game. Looks like the Chinese are going to start playing it.  They turned into the Decatur, and only fast action on the part of our ship kept a collision from happening. This is an escalation from what they have been doing, which is targeting our aircraft, painting them as it’s called, with fire-control radars, (this by the way is a hostile act very similar in nature to pointing a rifle at someone’s head and pointedly taking the safety off.) and doing “brush offs” with fighter jets against our ASW, Recon, and Bombers.

(note that we’re flying in air that they claim, so it’s the equivalent of someone claiming a beach, and the local surfers saying, “fuck off mate, the sea is everyone’s”, climbing down onto the beach, and having the “owner” of the beach point a shotgun at their head.)

In the civilian version I just described, what ends up happening, is the police get called, and a judge determines whether the guy with the gun is guilty of assault, or the guys with the boards are guilty of trespassing.  (Which is true depends on what state you live in.)

Of course, there’s no police and no courts that both sides will listen to, when we’re talking nations.  (yes, I know there’s international law of the sea courts etc… But both sides, US and PRC, have told them to fuck off.)

So, we get to where we are now.  The US isn’t willing to let our allies be cut off from supplies, (Japan imports ALL their oil, and is the number one destination for tankers coming out of the Middle East.) and China wants desperately to OWN all the methods of getting goods into and out of Asia.  This would make them the rulers in all but name of the entire Asian world. If you can’t get manufactured goods from or to the markets in Europe, can’t get oil, or minerals from the ME and Africa, can’t sell your stuff unless you kiss the PRC first, well…

Hang on kids, it’s going to be a bumpy ride.  This is how cold wars are fought, and it’s how a miscalculation, a miscommunication, a bad day, or just someone who is stupid starts a hot war.  The stakes are ASIA. We want freedom of trade, China wants Asia as it’s bitch. Let’s hope no one does anything stupid. Even with the reduced fleets that we have today, we can take the PRC’s navy, but it won’t be cheap, and it won’t be pretty.  Lots of people, ours and theirs would die, and a fuck ton of treasure would go to the bottom in the form of sunken ships, expended munitions, environmental disasters… (think about a modern Aircraft carrier, a nuke if it’s ours, sinking with a full load of JP 5, all the ordinance, and maybe a couple reactors… Or a nuke sub, ours or theirs, blowing up and cracking the reactor.  The local fishing is gonna suck for a few hundred years.)

If that isn’t enough for you of Navy adventures, we’ve got some moron who sent Ricin to the SECDEF, the CNO, Senator Cruz and the President.  FBI claims it’s an ex sailor. Well, the target list makes sense for a disgruntled Squid (except for Cruz, and if the guy is from TX…), even if the idea that one of my former shipmates having the know-how to make Ricin is a little surprising to me. If it was an ex-sailor, he’s going to rue the day he didn’t just end himself.  If it’s not an ex-sailor, then it’s going to be a man hunt, for the terrorist (foreign or domestic, ex-sailor or something else, it doesn’t matter, still a terrorist.) I know I wouldn’t want to be the guy that tried to kill Mattis and FAILED. Might as well try to kill Patton and fail, not gonna be a good day for you. There’s a meme going around, that shows Mattis looking out at you, saying “thanks for the Ricin, I mixed it with Marshmallows and made Ricin Crispy Treats, they were delicious.  I about believe it.