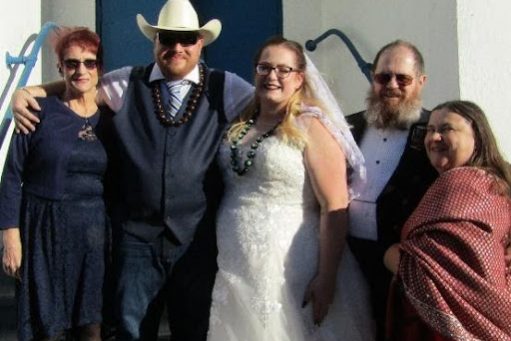 Welcome back to the Scuttlebutt, pour a drink, and pull up a chair; let’s talk.

Life is a constant series of changes, some good, some bad, some we won’t know about for years.  Just this week, I retired from the Navy after a total of 41 years of federal service in and out of uniform, got my daughter hitched (see above,) had my nearly new washer (9 months) break while eight guests were staying with us (more on that later,) got to see my son for a week for the first time in a while, and that’s just the local and personal stuff.

Then there’s national, and international stuff, which I’ll mention in some detail… All of these changes cause stress, yes even good changes cause stress.  If there’s anyone who wonders why we as a nation and a world are stressed out these days, they just aren’t paying attention.  So let’s talk about them.

First, I’m going to throw a rotten tomato at Maytag.  My old washer was a Maytag, and lasted 25 years… SO when I bought a new one, I bought another Maytag.  I’m now resenting that decision.  Maytag used to call themselves “the dependability people.”  Well, it seems that that ship sailed.  I spent two and a half hours on the phone on Monday (about an hour and a half of that was on hold three separate times as they passed the hot potato <me> around.) trying to get someone out to my house to fix my 9-month-old washing machine.

41 years of electronic troubleshooting and teaching same tells me it’s probably the central processor.  This is yet another reason to avoid overcomplicating things that don’t fucking need it.

In a car, using a central processor saves you a few miles per gallon, and keeps you from having to have a tune-up for about 100,000 miles, instead of the old days when you had to tune that sucker up every 20-40,000 miles, and replace the points, condenser, plugs, and wires.

In a washing machine? Maybe saves a gallon of water per load… color me unimpressed if its failure means I have to go to a laundromat (assuming I can find one of those dinosaurs) to wash my freaking clothes. But I digress.

Well in the end they told me on the first of November, that the earliest they could get someone to come and see my washer just to figure out what was wrong with it was 2 DECEMBER!  Then they sent me an email to confirm it, and they got my name wrong.  They got my son’s name, instead of mine, in spite of five different flunkies at their call centers in Tenn. and Georgia having me spell it out for them… (where they got my son’s name from is a complete mystery to me.)

Well, about here shipmates, I lost my shit and requested a manager.  About thirty minutes later, I got a second level type and went through the whole thing again… including having to tell her what zip codes are around mine (because they obviously don’t have a computer to figure that shit out…) in the end, they asked for three days to get one of their “special action teams” to see if they could find someone else close enough to me to come out and fix my stuff in less than a month and a day.  As I write this, we are on day two.

I did sort of allude to the fact that:

Stay tuned for further developments on this. I’m more than willing to make a fucker famous, in a bad way.  Seriously, a MONTH to get someone out here? What happened to “the bored Maytag repairman, who sort of wishes something would break, so he would have someone to talk to?”

Next, there’s the latest on the USS Connecticut.  The official story now is that she hit an uncharted Sea Mount. I’ve also heard an unofficial that she hit a Chinese drilling rig that had been moved, but not reported as moved.

Which of these is true?

Well, your guess is as good as mine.  More when I learn about it, if it’s not classified.

Speaking of China, a couple of pieces of news there as well.

First, it seems that the Chinese government has been encouraging their people to stock up on food and other essentials.

I’ve been hearing hints and rumors for a couple of years now, that China has at least as much internal strife as we do…

This lends further faith and credence to that.  The historical trend when totalitarian governments who rule through intimidation and fear, start to feel uncomfortable with their stability, is to crack down.  To squeeze harder, trying to keep hold of the nation.  Sometimes this works, sometimes it incites revolution… We shall see which way it goes this time.

One thing, for any policy wanks that might be reading this? For the love of whatever you hold holy, keep us the fuck out of it!  We do NOT have a horse in that race, not our business, if we are lucky and they do have a civil war, I am voting for a long, bloody, and inconclusive war ending in collapse.  Yes, that will hurt our bottom line.  Better that than the alternatives.

Speaking of which: another thing that totalitarian regimes do is start foreign wars, to divert the people’s attention… After all,  if you’re at war with the enemy of your people… Well… can’t exactly start a revolution now, can you?  (here’s a hint, we are the folks they would likely start a war with.)

So, what happens first, they start a war with us or collapse in an internal revolt?  Damn fine question, my magic eight-ball is broken, keeps saying “answer unclear.”  It’s going to be a wild ride.

Next up while we’re talking about war and other foreign adventures, lets talk about the presidential mandate.

You all know I’m not much for conspiracy theories, but if I wanted to clean the military and civil service of anyone who won’t follow an unreasonable order, without testing said groups by ordering them to do something Blatantly Illegal ® this is as effective as any way I have seen.   And it’s working.

I was keeping quiet about this while I was employed, for obvious reasons, but now I can report on it.  Last numbers I have, only about 58% of Puget Sound Naval Shipyard has taken the Jab.  Norfolk is way worse at about 1/3rd, the only Shipyard with high compliance numbers is Pearl Harbor with around 98%.  Frankly, we can’t afford to lose even two percent of the employees of any shipyard, and nearly half, to two-thirds? Are you out of your ever-loving MIND?

My Gods, we’re already undermanned, and it takes literal years to create a trained shipyard worker.  If shitty, sleepy, Joe doesn’t reverse course, this will hurt the Navy for a decade-plus.  However, it may give him a workforce that he (OK more likely his handlers, I don’t think he thinks at all, the man is an Alzheimer patient) believes is compliant to whatever orders come out.  Dangerous enough in the shipyards, far more so in much of the rest of civil service.  Also, not accurate.  I know a LOT of troops that got the jab under protest because they couldn’t afford to be out of work, that would not side with DC if an actual rebellion broke out.

Further thoughts on that, Joe, you might look at the results of the most recent election, before pushing any further.  This morning, some bright boy posted a meme that suggested that McAuliffe lost in VA because all the extra votes were printed up in China and are stuck on a boat in LA harbor.  One thing is a fact, the greater the margin, the harder it is to cheat.

Joe, the people have spoken from coast to coast… Even Seattle has gone from Rabid Liberal Democrat to Centrist Law and Order Democrat (which is as good as you’re going to get in that hell hole.) your leftist bullshit is NOT popular.  Even people that voted for you are deserting your case in droves.  Now I realize your handlers consider themselves to be the smartest fuckers in the room, but folks are DONE with your shit, you might want to take a page from Bill Clinton, and seek a way to get some compromise because sure as the sun rises in the east, you have one year before the senate and the house are both in the opposition party’s hands.  Oh, and Nancy, Chuck, you fools better be careful what rules protecting the party, not in power you get rid of.  If you haven’t learned by now, the Republicans will use whatever tools you give them, to smack you around.  It’s happened to you twice at least, in the last ten years, for the love of Gods, learn something.

This is a common mistake and a lot of people that are otherwise smart buy into this… Not that I am suggesting that the authors of the article mentioned are smart, they work for the NYT, so they’re probably either dumber than my dog, or more crooked than his hind leg…

BUT what I want to talk about briefly is the very common belief that cops are being told to make the city money.  Folks I wore a badge for ten years, and it just ain’t so.  Yes, cops pull over people with broken tail lights, cracked windshields, etc… Well, I’m going to let you in on a little secret to the science of law enforcement.

Come on, huddle in, we don’t want to share this with just everyone.

The numbers are stark.  Around 80% +/- 5% of the fuckers rolling with moving violations have warrants out for their arrests.

Now, does officer Friendly actually care if you have a broken tail light?

Well maybe a little, after all a white light can blind the following driver, thus causing an accident, which officer Friendly would then have to spend a lot of time and effort doing the investigation on. (Traffic accident investigation is a pain in the ass, and it often means you get to appear in court, during a lawsuit between two insurance agencies, a fate worse than death.)

But his BIG deal is not that broken tail light, which he will generally tell you to fix, give you a fix-it ticket, and send you on your way.  What he wants, is an excuse to run your ass into the system so that he can find out if you have any warrants for your arrest.  What most cops really want to do is get the bad guys the hell off their streets, preferably before they hurt anyone that’s not a bad guy.  Statistically, enforcing those vehicle operation laws gets him (or her) a couple of warrant customers a night.

That’s ALSO why cops walk up to your car watching you very closely, why they turn on all of their lights making it very hard for you to see them (it’s called a curtain of light.  It makes aiming at officer Friendly a bitch.) and might just have a hand on or near their weapon.

See if you pull over the fuck with the felony forest of air fresheners hanging off the rearview, the cracked windshield, and the broken tail light, and he’s running meth for the Banditos, with two warrants and five FTAs (failure to appear, means he didn’t show up for the judge) He just might decide to shoot it out, rather than go to county lockup.

Still, this is better than showing up at the scene of a murder, because someone disrespected said hood-rat, and his or her rep was on the line with the club.