Caucuses, Welcome to the 2020 Campaign 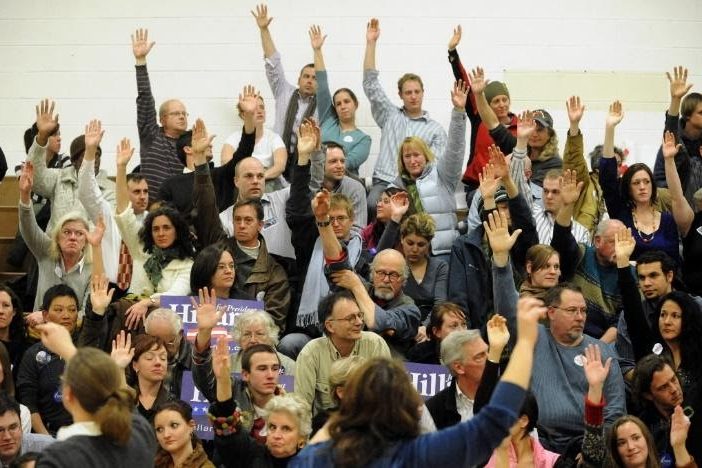 Oh hell, hit the fridge, or the liquor cabinet, and let’s talk.

Welcome to Campaign 2020.  Do yourself a favor and get snot slinging drunk now, and stay that way until November.  If you fail to do this, don’t come crying to me about “oh my gods, these fuckers are so stupid it makes my head hurt!”  Dude, I warned you!

So, let us talk about the rat bastard abortion that was the Iowa caucus and how this is all playing out…

First off, for those of you that aren’t familiar with how a caucus works: everyone that wants to help decide who their state grants its delegates to, shows up at their local high school gym, or  VFW hall, or … pick big fucking room here.

Now, it’s important to note, the caucus and primary system is run strictly and solely by the parties.  It’s PAID FOR by taxes, and DO NOT GET ME STARTED ON THAT SHIT, but it’s run by the Democratic National Committee and the Republican National Committee.  They decide the rules, they choose who can run, they determine how the delegates are assigned.

In the DNC, they have these things called “super delegates” that are basically “the God Fathers” of the party.  We’re talking about people that don’t represent a single constituency, but rather are “at large” and are the big wigs of the party.  These include any past presidents or VPs, speakers of the house, etc etal… You know, Nancy Pelosi, Obama etcetera, ad very fucking nauseum.  There are enough super delegates that if you sweep them, you can lose every fucking primary and still get the nomination.

Anyway, back to the caucus system!  So all the folks from a voting district, that are declared members of a party get together in this big hall, and they form into groups.  The group in this corner are the supporters of candidate “A”, we’ll call him Bernie Sandinista, in that corner, we’ll bring together all the supporters of candidate “B”, we’ll call her Fauxihauntious, in the third corner we’ll gather together all the supporters of Candidate “C” we’ll call him Joey Buttplug, and so on…  Then reps of the party go around and count… they tell everyone who is supporting a candidate that has less than X% (in Iowa it is 15%) that “you are supporting a “non-viable” candidate, and must move.

All the candidate supporters whose candidates are still in the running start trying to convince the guys who’s guy is out of it, to come and support their guy instead.  This can get ugly. I mean Half Way night mess crank competition ugly! Once all of the guys who had been backing losers pick a winner, the Powers That Be count again, and the numbers are reported to Headquarters. In this year, they were supposed to report three numbers: original spread, post realignment spread, and delegate numbers awarded. Thus, an overall winner, second place, and so on are declared…

This is how it’s supposed to work.  In Iowa, the failure point was at the “reporting” section.  Hillary’s folks built an “app” to handle it, after the questions from the last primary about how Bernie Sanders had won way more delegates than he received, and how Hillary’s folks stole delegates.

Yes, you read that right, the person who stole the nomination’s troops, were the guys in charge of creating the computer app that would keep it from happening again.

In other news, the foxes have elected Brier Fox, as the chief of security for the hen house…  Kids, I can’t make this shit up. Other than this blog, I write two things. Lessons for electronics students, which must both make sense and be factual, and Science fiction & Urban Fantasy, which MUST make sense or people won’t buy it.  That’s the difference between fiction and reality, fiction has to make sense.

So, came the night of the Iowa Caucus, and this app, written by Clinton Apparatchiks, suddenly isn’t letting caucus leaders log in, and there are “inconsistencies”!  So much of a cluster fuck that the state can’t report out a result, even a PRELIMINARY result, half a day after the caucuses are done. But, and the DNC is MOST adamant about this, they WERE NOT HACKED!

Well, the end result is here it is, two days later, and we don’t know for certain who got how many delegates from Iowa.  All of this plays into the Far left coastal crowd’s crying that “Iowa is TOO WHITE, TOO OLD, TOO CLUELESS to be the first state to pick winners and losers for their party. “our party represents the young hip minority vote, and Iowa has no place in that, they’re flyover country”!

Napoleon is quoted as saying “never interrupt your enemy in the middle of making a mistake”.   So, DNC, you go right ahead! You do you, baby! By all means, move the first chooser of the slain out to the coasts, drive your party ever further left.

Forget the fact that you can’t win the election under the current rules by just winning the inner cities of a few megalopolises. Look, the Electoral College is designed to make sure that a candidate can’t win by just appealing to the giant cities (yes, this was a problem even in the 1700s!) the system forces not one election, but as many elections as there are states, and then determines winner based on who carried a plurality of the states. It’s designed to protect the minority population (by the way DNC, in this case, that means urban and farm folks, not illegal immigrants) from someone who can take the big cities but nowhere else.

If they get their way, someone, California, or New York… someone on the coast will get the first shot at picking winners and losers.  This will drive their party ever further away from the center… and more “undecided” will look at their platform and say “are you fuckers out of your MINDS?”

Hopefully, this will cause the death of the DNC, and the birth of a reasonable party that I could support.  Frankly, the Republican party isn’t someone I’m a huge fan of either, but in a world where we only have two viable parties, and I have to choose between the party of Bernie and OAC or the party of Trump and Cruz, well, I’ll take the second.  Doesn’t mean I like all their positions, just that I think the other guys are crazier than a shit house mouse.

What we really need, is a viable third party, but I don’t see one of those on the horizon yet.

Watch your ass, it’s going to get crazy out!