Calling A Spade A F**kin’ Shovel 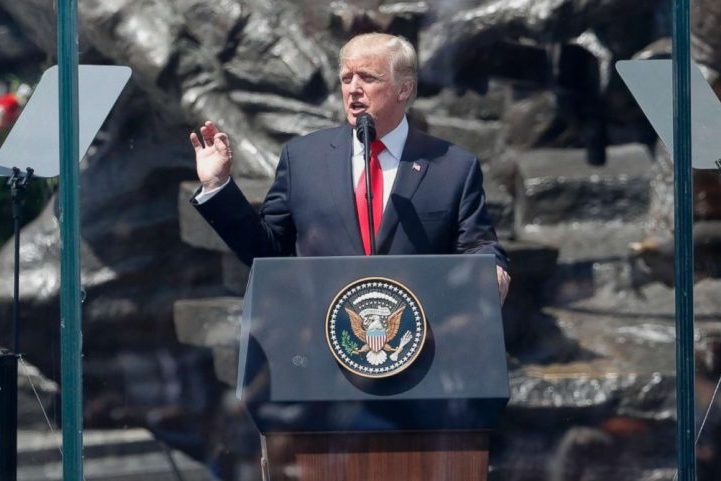 Well I went out to a medieval war for the last week, and I could write about war through the ages.  My son, who was an enlistee into the USMC and medical discharged out in boot just let us know what the doctors said, and how that’s going to affect his life, and choices, which is bringing me down (not something the corps did, preexisting condition, spinal) and I could write about that.

I’m involved today on a fairly well argued and well-reasoned discussion on Naval Ship design and procurement, and I could discuss that.

I had originally planned to write about the latest stupidity from North Korea. But Instead, I’m going to discuss President Trump’s speech in Poland.  Why? Because he has finally said something that more than half of the guys wearing uniforms have been asking for years, but no one has had the Testicular Fortitude to say publicly to the world.

Look, here’s the thing, we are in an ideological war, and have been since the 70s. (arguably before) It wasn’t noticed in the 70’s because we were also in the middle of another war, with another ideology, Communist totalitarianism.

I’ve heard some asshats tell me “you can’t win a war against an idea”.  Yeah? Tell that to my Grampa, he was a combat swimmer, scouting beaches in the south pacific for amphibious assault, during the pacific portion of WWII.  The Axis powers were more than anything, an idea.  The idea that there is a “chosen race” (the axis argued over whether that race was Arian, or Nipponese, but both of those thought they were the only real people, and everyone else was untermench.) It took total destruction of the German nation, and two nuclear bombs on Japan to get the point across, but we won that war of ideas.

Then there was my war.  Also, a war of ideals.  I spent 15 of my 20 years in uniform fighting that war.  It was fought by proxy wars, and in dark little exchanges that may never see the light of day.  In threats, and counter threats, bluffs, and expenditures.  It was the war of “free men and democratic institutions VS Communist totalitarianism.” AKA the Cold War. Don’t let anyone tell you we didn’t win that sucker, not only did we win, we have their state of the art ICBMs in OUR museums, (the SS20 in the Museum of Flight was SUCH a rush to me.  It proved without a shadow of a doubt, we won that sucker) We sell their Historical war treasures on “cheaper than dirt”.  You too can own the rifles that kicked Nazi ass back to Berlin, then burned it around their ears.  You think that shit would be for sale in America if we LOST???  Hell, you can buy soviet KGB crests (REAL ones) on the open market.  Go to Russia and try to buy CIA or NSA shit.  Good luck.

But, while that war was being fought, another one was brewing.  Yes, we had a part in making the monster that we now must deal with.  We aren’t the first, we won’t be the last.  (Neville Chamberlain mean anything to you???)  Hell, a good case can be made that the Brits created the American revolution, and the American army, so there’s a fine old tradition of making mistakes and creating enemies through the “LAW OF UNINTENDED CONSIQUENCES”.

The enemy I speak of, is of course “Radical Islamic Fundamentalism” or RIF.  We ran into it in 83 in Beirut. (I was involved in that little dust up) but thought we were dealing with a USSR proxy fight.  We were wrong.  We ran into it in ’79 with the Iranian Hostage crisis, and thought it was a little thing, that yes, we had a part in creating.  Here’s the thing, though.  It’s bigger than those, and in fact, it’s bigger than any single nation in the M.E.  Oh some of the nations are helping it along, (looking at you here House of Saud) I understand where Saudi Arabia is coming from, they’re riding the back of the tiger. They’re exporting the troublemakers, and allowing the Fundies to proselytize in other nations, because the alternative is to face revolution at home.  But while I understand it, that doesn’t make it any better.

Trump’s speech called it like it is.  Are we, The West, the bastions of free thought, free speech, the right to have an opinion contrary to that of “accepted orthodoxy”, willing to stand and fight for those things?  Or have we become so weak, so fearful of words, and of being considered a “big Meany” that we will allow ourselves to be overrun by people that FLAT OUT STATE that their goal is the destruction of our society?

Yes, Trump said something about “Christianity”.  Oh, gasp. Oh, the horror. Look, I’ve made it no secret here (I think) that I’m not a Christian.  If that isn’t clear, let me make it clear. I’m not a Christian.  I’m a Pagan, (specifically Asatru, if you must put a label on it.)  Doesn’t matter.  I can live with Christians.  The most that they’ll do to me (ignoring the asshats like the Westborough Baptist Church, which is, frankly a law suit mill, not a church, and is welcome to come protest any time they want… but they won’t like it.) is pray for my soul.  My perception of the afterlife is that any heart felt prayer is good, whether it’s to the deity I follow or not. (I may be wrong, I’ll find out soon enough) The Christians haven’t tried to kill me for my beliefs in centuries.  The Muslims, on the other hand, make it perfectly clear that I’m not even eligible for conversion (as a polytheist), but only for stoning to death.  Well, as someone in what was then the west, said to someone from what would become the womb of the Muslim church, MOLON LABE!

The Question though, as asked by Trump, and by many of us in uniform over the years, is, “are there enough of us, willing to stand and fight, whether by speech, by ballot, or by “standing between our loved home, and the war’s desolation” to turn aside this invasion?

Make no mistake, it’s an invasion.  Or, if you would prefer, it’s a migration.  The sort of migration not seen since the Celts moved out of the Caucasus and India, to Europe, BCE.  72% of the migrants are male, and over half are under the age of 40.  Not my statistics, that bastion of conservative thought, the U.N. says that. 430,000 in Europe this year alone.  If that’s not an invasion, I don’t know what is.

There are areas of Paris, and London, that the police won’t go into, run by Sharia law.  Dwell on that shit for a second. There are areas of the capital cities of two of the major nations of Europe (it’s also true of many of the smaller countries like Denmark, etc. but FUCKING LONDON AND PARIS???) that have been ceded to invading forces.

There was once a time when as a sailor, I believed I was advancing the light of civilization.  Now, I just want to hold back the darkness of theologistic totalitarianism.  There are people that believe the West is too big for RIF to eat, that we’ll defeat them by being kinder and gentler.  Those people probably also believe that an elephant is too big to eat. The African tribes have a saying about that: “how do you eat an elephant? One bite at a time.”

Don’t look around but someone is trying to take a chunk out of your ass.  Trump was just man enough to point it out. We can either do something about it, or, like Rome, we can tell ourselves that they’ll calm down and buy into our civilization if we’re just nice enough.

Ever notice what happened to Rome?

This centurion doesn’t want that to happen here.  The time is now to say “if you like your nation, stay there and fight for it. This is ours, and you can’t have it.”  If not now, when?

Sorry to bring you down, but that’s the way I feel about it.  Thanks for stopping by.

Until next week, keep your powder dry, and an eye on the weather and the horizon.