Call It What It Is 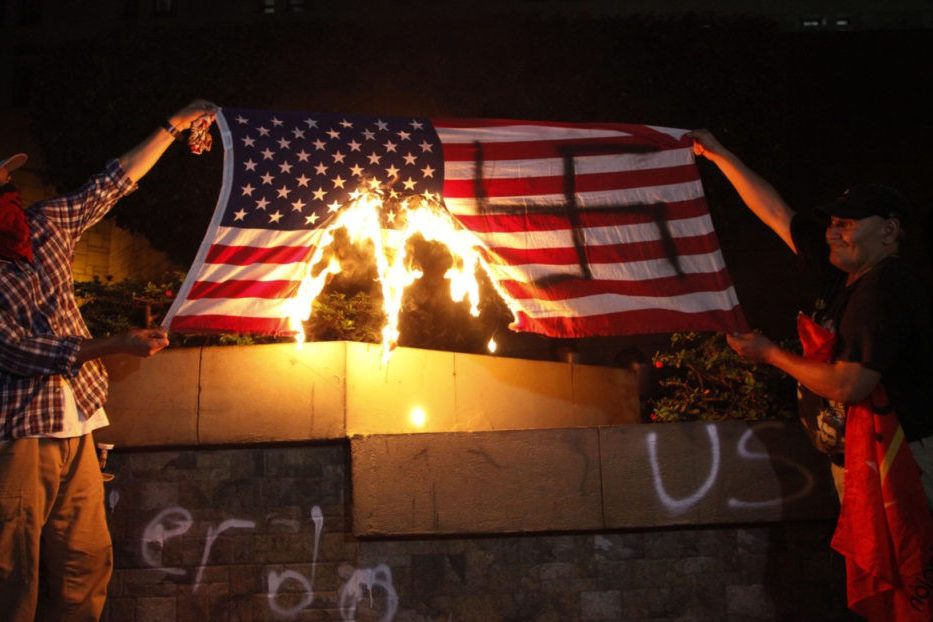 Well, I feel like I need to weigh in on the invasion force oh sorry, refugee caravan, headed our way.

Look, refugees don’t wave the flags of the country they are fleeing from.

Refugees don’t burn the flag of the country that they hope to give them sanctuary.

Refugees don’t clock over 100 miles a day, which this caravan has managed.

Here are the things that bug me about this:

First, the timing is as suspicious as the cat walking in nonchalantly after you hear a giant crash.  It just happens that this caravan formed up and became some 7000 strong just in time to make it to the border just before a very contentious election?

Third, you’re moving seven thousand people fourteen hundred miles in a couple weeks… That’s something the military practices, and studies how to do on a regular basis.  It takes a shitload of logistics to pull off, it’s not something that you do on a whim and not have major failures, lack of food, water, equipment (in this case shoes etc) you’re marching through a couple desserts, lack of water will kill you in three days or less.  Now I say marching, but I’ve seen video footage of them getting in busses and flatbeds. Again, supply considerations for that size of a unit… Fuel, drivers, water (notice how often water comes up?)

Fourth, some of the folks that are in this unit seem awful healthy to be “refugees”, and with the exception of Venezuela (and they’re not coming from there), there’s been nothing that has caused a rapid enough change to drive a wave of refugees like this.

Look, we’re talking about a World War Two Division here.  Something that during that war, would have been commanded by a two or three-star general.  That’s a lot of people.

Now they MAY not be bankrolled by someone (and I may win the mega millions tomorrow…) but whether they are or not, this many people constitute a migration, or an invasion, not a convoy.  But again, and again, who benefits?

And yet, if it is The Left, I think it’s going to backfire on them as bad as the Kavanaugh nomination did.  Oh sure, if Trump deploys the military as he has said he will, and some pregnant woman gets killed (and make no mistake if this is a leftist inspired/funded op, a pregnant woman “with a compelling narrative” will be killed, and America will be vilified…) The coasts will go crazy.

But the truth is, the coasts (except the southern US east coast outside the mega-cities) are already left, so you’re not taking any of Trump’s base away, nor his allies.  And those of us that aren’t leftist, having watched these douche canoes paint swastikas on our flag and burn it in effigy, just no longer care. The solutions I’ve seen to this convoy range from Artillery, to A-10 attack aircraft, to tanks with beehive rounds (basically giant shotgun shells, fired from 120mm tank barrels), to napalm.

In short, they’ve driven a large percentage of the population into a “general Crook” mentality. You remember him? Indian sorry, indigenous person fighter? Coined the phrase “kill them all, large and small, nits make lice”?

Now is that a horrible thing? Yeah.

Yet, we’ve seen what mass migrations like this are doing to Europe, and there’s enough sentiment to support what could become mass murder on the border.  Is it murder? Well, maybe, but only because the people that are coming are just massively outclassed in a fight, and if they won’t stop, they’re liable to get shot down.  It would be more honest to call it mass suicide by soldier.

Well, could Trump or his supporters be behind it?  OK, there is this thing called a “false flag” operation.  That’s a term of art, for setting up something that hurts you, or someone else, and makes it look as if your enemy did it, so as to give you an excuse to attack or give you some other advantage.  And yet… I just don’t buy that. Couple reasons. One, Trump isn’t that subtle. Two, Trump doesn’t need it. Look at the numbers of seats the Republicans have in play, and what the elections look like in those seats, V the numbers for the Democrats… I see the Republicans maintaining their hold on the house and senate anyway, maybe picking up a few seats (remember, you heard it here).  So why?

The left, on the other hand, Kavanaugh backfired on them badly, Cough #walkaway, cough…  #metoo didn’t get them nearly as much traction as they had hoped, Yeah, I could see them being behind this.

Or someone (hostile nation type) that has a desire to sew chaos in our nation, that doesn’t care who wins, as long as the fighting continues… That’s a scenario that I don’t have any problem believing.

What I don’t believe, is that a US Division worth of people just up and decide to march the length of Mexico plus, to get to a nation that they claim to hate, just before an election, on a whim.

Now, on top of it, in news breaking as I’m writing this, we’ve got pipe bombs delivered to some of the most visible left, the ones that the right loves to hate.

But then we find out that they were never mailed (there are stamps on them but they weren’t canceled) so the claim is they were hand delivered.

None of the bombs work or could be made to work.  They’re Schedule 40 PVC instead of metal… (that means no shrapnel, just a loud boom, noise and fury signifying nothing.)

And finally, if they were meant to be real, and to attack their alleged targets, a timer mechanism as a means of detonation?  Really? How likely are you to get your target with a timer?

If this was a right winger, he or she was the most inept moron on the planet.  On the other hand, bombs have been the traditional weapon of the left: Ted Kaczynski, The weatherman underground, the Red Faction in Germany, the Baddermienhoff gang, also in Germany… (OK there was the Oklahoma bombing…) False flag? I don’t know.

Who-ever it was, I hope they catch him or her, and I want them alive, so they can talk (that’s another thing, bombers almost always do statements.  They want people to KNOW why shit was blown up. Where’re the claimants, the manifesto?) If they find a guy who was “shot when they attempted to capture him”, that’s going to smell worse than last week’s gas station sushi.

We live in “interesting times” folks. Stay safe. watch your six, until next time.