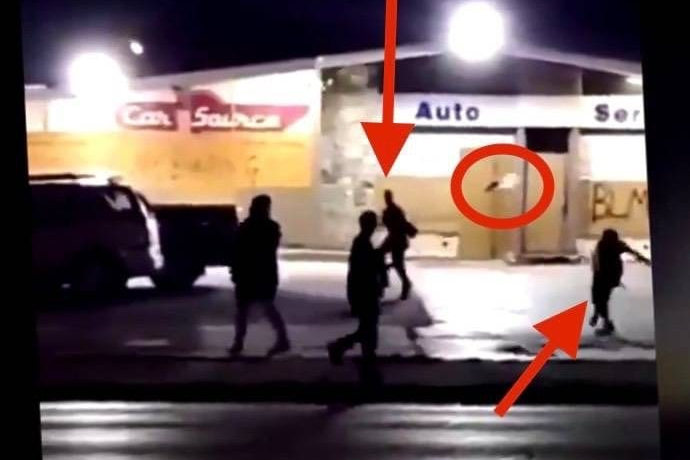 Welcome back to the scuttlebutt.
Well, shit.

Pour something strong, and get me one too, it’s going to get bad out.  We just may have had our “bloody Kansas” or “Boston riot of 1770” event.  If you don’t know what those words mean, GTS, I don’t have time to fix the failures of your schooling.

A couple days ago, in Kenosha WI, there was a shooting. The 911 call identified a fight including a man with felony warrants, and a known violent offender.  Well, the cops rolled in force, as they would have any time you’ve got a call like that.

Upon arrival, they tried to apprehend the dude in question, as is verifiable in the recordings from the dispatch operator at 911.  Said dude fought off three officers.  So, in accordance with use of force policies they employed their tasers.  It failed to stop this guy, who then dives into his van to get something, we don’t yet know what, out of the center console.  The cops are trying to haul him out of there, and get him to comply… they fail.  At some point one of them apparently sees something in the console that causes him to believe there’s a weapon.  They shoot him.  Even after they shoot him, he continues to try and get something out of the console so they shoot him again.  By the time he quits digging in the console he’s absorbed 7 rounds.  All in the back.  (by the way, this isn’t the bloody Kansas event, it’s the lead up)

Now there’s a lot of people making a big deal about the fact that it was 7 rounds.  Here’s the thing.  Cops are taught to “shoot two rounds center of available mass, shoot to stop”.  Three officers, one shoots the first time, all three shoot when the first set doesn’t stop the guy.  That’s 8 rounds.  One missed.  Shoot to stop means once deadly force is authorized, you shoot pairs until the bad guy quits doing what caused deadly force to be used… in this case, digging something out of the console.

Was this a good shoot?

If you say you do, and you weren’t there, you’re a liar or a fool.

The Kenosha PD haven’t released the reports, nor have they told us what was in the console.  Was it a gun? A knife (and if you don’t think a knife is a deadly weapon, I’ll let you have a holstered pistol, I’ll take a bowie knife and stand 5 yards away.  I’m old and fat.  I promise you, unless you turn and run, and can run faster than I can, I will kill you before you clear leather.) or was it some sort of paperwork that showed he had a right to be there?

Did the cop panic and claim to see something that wasn’t there?

What we do know is that this started the riots.  No, these were not protests, protests don’t burn down car dealerships that have “Black Lives Matter” on their reader board, nor do they burn down the church next door.  Oh, and speaking of burning, here locally, the BLM mobs blocked the doors to the east precinct in Seattle with concrete barricades and rebar, then lit the place on fire… So this is the atmosphere that the rest of the story is working in, and fire, deadly fire, is the weapon of choice as exhibited by events.

Into this mix we add a group of younger men, who are armed and who are dedicated to saving the families business, a gas station.  Now it doesn’t, or shouldn’t matter, but this group is of mixed races.  They are armed with rifles, and based on pictures are appropriately trained. (by which I mean they keep their fingers indexed, practice good muzzle discipline etc…)

The local Police stop and talk to them (there’s video) and conclude they are:

1) within their rights, and

2) have a clue, and are dedicated to preserving this gas station, not going on a wild rioter hunt.

Fast forward a couple hours.  See that picture at the top? The circle is around a firebomb, a “Molotov cocktail” that’s just been lobbed by the guy with the arrow coming up from the bottom of the page, at the guy with the arrow coming down from the top of the page, and at the gas station.  I think we can all see where this could go… and then the guy who is on the receiving end of the firebomb shoots the guy who tossed it, in the head.

Legitimate self-defense? At least in my mind it sure as hell is. The shooter then immediately calls 911, identifies himself as having just shot a man in self defense and says he wants to surrender to law enforcement.  About this time the mob starts coming for him.  He turns and runs toward the police lines, before getting knocked down by a rioter wielding a skateboard.  Said rioter hits him in the head a couple more times before this guy unlimbers his rifle and shoots the bastard in the abdomen, killing him.

This isn’t enough for the mob, so another guy, who, it’s worth noting:

2) Is a felon, who is in possession of a pistol, which is illegal as hell, and

3) said “medic,” felon, points the pistol at our rifleman.  Not being Han Solo post Disney, our man doesn’t wait for the bad guy to shoot first.  There’s video and stills all over of this asshat, pistol still clenched in his fist (because the tendons are shot off and he probably can’t open his hand) with his bicep shot off.

At this point the Mob suddenly realizes that it’s not an invincible force of nature, but rather a group of individuals, who are mortal and “hey, this is real shit, we can die!” start screaming for the Police to help them…(Yes, the same police who’s head they wanted on a pike a few minutes ago!)

The Police on scene refuse to arrest the rifleman (or as the press are styling him, “the vigilante”) and he ends up going back home, where the IL police arrest him for murder one, and are holding him to extradite to Wisconsin for trial.

It’s also worth noting that this armless wonder just did his side a serious disservice.  He has removed any chance that a thinking man, or even me, will honor the age old concept of “medic” being above the fray, and not a combatant. I’ll tell you right now, that Medic vest, or hat, isn’t going to mean a fucking thing if you show up at my gate with a mob and a plan to burn me out, or take my possessions.  I now have every justification in the world to believe that “medic” is a shield to hide behind until it’s time to shoot me.  As I mentioned, I’m old and fat.  If there’s a mob at my gate, I must believe they intend to kill me and my family.  I’m too old to fight them off, so I’m just going to start shooting, starting with the mouthy one and then the biggest one, or the one that looks like the worst threat.  I will keep engaging targets until you get to me, or until you break and run.  If there’s enough of them, and they stay in a mob, they’ll get me eventually.  But they’ll walk over their own casualties on the way.

Here’s a little tip, if, Gods forbid you ever find yourself in this situation.  A mob has no brains, and no conscience. They are a stampede. A mob believes itself invincible and if it stays a mob, it’s usually right.  The individual cells of the mob (once known as human beings) will die, but the MOB lives.  The way to break this cycle is to make those cells realize that they are individuals and that the mob doesn’t give a shit if they live or die.

This is called breaking their morale.

It can best be done by shooting the loudest one right in the mouth. Then the next loudest one, and the biggest ones, the ones everyone was scared of, which is why they joined the mob in the first place.  This causes the rest of them to realize that “oh shit, if THEY can die, so can I!” If they’re not trained troops, they’ll break.  Hell trained troops are liable to break if you take out enough of them.  The alternative is dying. The mob doesn’t care, it doesn’t care about anything not it, and is as liable to attack “friend” as foe, because you see, a mob has no friends, just targets or obstacles. You MUST break the mob, or it will destroy you.

Considering the amount of video evidence that has already hit the street, this kid is going to walk, just like the couple in St. Louis did.  But the damage is done, and the mob is posting this kid’s name, his family’s names, addresses and phone numbers, while calling for them to be killed!

I expect that once the press gets a look at how much proof there is that this kid had a legitimate self defense case, the news will quickly bury the story.  The mob on the other hand, isn’t so smart. Further, one of the funding sources for the organizations behind the mobs, one George Soros recently said “I would describe it as a revolutionary moment when the range of possibilities is much greater than in normal times. What is inconceivable in normal times becomes not only possible but actually happens. People are disoriented and scared.”  His goal seems to be to, in the words of J.E.B. Stewart, “Keep up the skeer.”

The trouble is, people are going from scared to MAD.  The window under which we escape at least a low level shooting war ala “The Troubles” in Northern Ireland, and quite probably something that looks more like a high tech version of the Balkans in the 90s is closing fast.

It closes another few inches every time a mostly white urban mob screaming “Black Lives Matter” burns down black business in the name of “justice.” It closes some more every time someone needs to defend their home or business with lethal force because the cops have been ordered to stand down and watch while the mob burns shit down. And it closes still more when the people who defend their homes or property are prosecuted, while the fuckers that are burning towns to the ground are left alone.

You won’t win, and neither will anyone else.

What will come out the other end will not be what we recognize as the American Republic, and it probably won’t be as free, or as friendly.  Once the mobs start, and the “death squads” start, they develop a life of their own.  What starts with lofty goals usually ends up with a “reign of terror,” and a very different civilization.  One where people who don’t match the values and beliefs of the winners are put up against walls.  This is not what I want for us, and not the world I want my grandchildren to grow up in.

For the love of anything you hold sacred, use your voice, use your reason, use your contacts.  Help put water on this fire, not gasoline.  Fire burns us all, and it only takes one side to toss in a match.  It takes all of us to spread AFFF on the pool before it goes WOOF.

In the meantime, if you are in possession of firearms, and you aren’t carrying you’re an idiot.  If you don’t have body armor, I suggest you get some.  We are in for a world of shit I fear.