Best and Worst of the NFL Draft 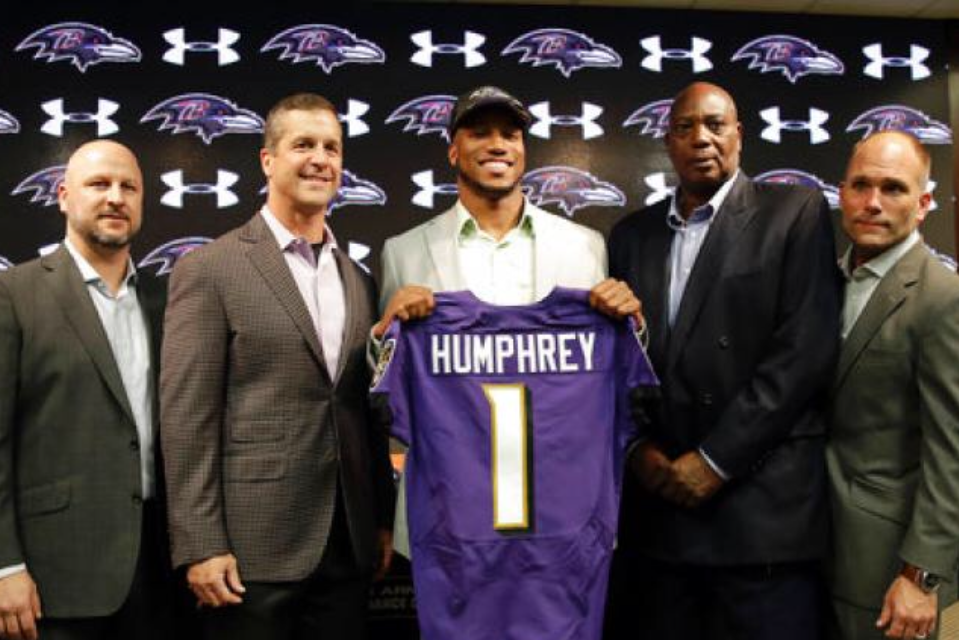 Baltimore Ravens​- The Ravens entered the draft with needs at outside linebacker and cornerback. These question marks on defense were answered in a big way. GM Ozzie Newsome added two players from his alma mater, Alabama, as Marlon Humphrey was selected in the first round and Tim Williams in the third. They both join former Crimson Tide player C.J. Mosley on the defensive side of the ball. Tyus Bowser, outside linebacker from Houston, was taken in the second round and should be able to help the Ravens improve on finishing 24th in league sacks. Defensive end Chris Wormley was taken in the third and was Michigan’s best defensive lineman for the past two seasons. He could start immediately and also get after the quarterback. The next two picks added depth to the offensive line with Siragusa and Eluemunor. A flier on a safety wrapped up the draft for Baltimore. An effort to pressure the quarterback and improve the secondary was the obvious goal and it was accomplished beautifully.

Houston Texans​- How good of a draft could a team who made the divisional round of the playoffs have? The Texans drafted a franchise quarterback, added one of the biggest value picks of the draft, and selected a top 5 running back in this class. Deshaun Watson will have a great chance to start right away by beating out Tom Savage and Brandon Weeden. The Texans got another defensive playmaker with Zach Cunningham in the second round. He was considered by many to be a first round selection and will only add to the argument that the Texans have the best defense in the NFL. Cunningham was a huge value at 57th overall. In the third round, D’Onta Foreman was selected from Texas to give Lamar Miller a better insurance policy than Alfred Blue. Offensive tackle Julie’n Davenport and defensive tackle Carlos Watkins added depth to both trenches in the fourth round. A flier on a db in the 5th and a center in the 7th rounds out the class. For a team who competed with New England as well as anybody in the AFC playoffs, the Texans greatly improved their offense and defense in this draft.

Washington Redskins​- Jonathan Allen somehow fell to 17 which started a stellar draft for the Skins. Allen was thought to be as high as the best player available at the start of the draft but fell behind fellow defensive linemen Myles Garrett, Solomon Thomas, and Derek Barnett. His teammate, Ryan Anderson, will give Washington a pass rusher at the outside linebacker position. The duo from Alabama combined for 19.5 sacks in their last college season together. Fabian Moreau will come back from his pec injury eventually and grabbing a corner with first round talent in the third round is a steal. Samaje Perine was taken in the fourth could challenge for snaps right away. He ran for over 1,000 yards last season at OU and was a consensus top 10 running back in this year’s class. An additional fourth round pick allowed Washington to draft Montae Nicholson, a safety who ran a 4.2 40 and had 200 tackles in his college career. 5th round tight end Jeremy Sprinkle can learn behind Jordan Reed. Round 6 saw a receiver and a center taken. The Skins ended the draft with two picks for the secondary in the seventh round. Overall, 6 defensive picks and 4 offensive was a very balanced approach to a great draft.

New England Patriots​- Is it blasphemy to have the Patriots as a team who didn’t impress at the draft? They only had four picks and the first didn’t come until 83 overall. Taking two defensive ends and two tackles is a smart way to develop some important pieces in the trenches but it’s possible none of those players will contribute right away or even make the team. Of course, bringing in Stephon Gilmore, Brandon Cooks, Rex Burkhead, and re-signing Dont’a Hightower will still put the Patriots near the top of offseason grading. However, as far as the draft goes, the defending champs brought in the least talent.

New York Giants​- The Giants only had six picks this year and spent one on Davis Webb, who will not be playing quarterback until Eli Manning leaves town. Webb is arguably not a top 5 quarterback in a class that is already thought of as weak. The Giants may could have waited for a year with more picks to take a flier on a quarterback. Their 5th and 6th round picks aren’t bad but won’t be immediate contributors. This leaves the Giants with first round selection tight end Evan Engram, second round pick defensive tackle Dalvin Tomlinson, and fourth round running back Wayne Gallman as the only legit contenders for playing time. The Giants had bigger offensive line needs than a sixth round tackle can solve. With the addition of offensive weapon Brandon Marshall to go along with Sterling Shepard and OBJ, I think tight end Engram was a reach in the first.