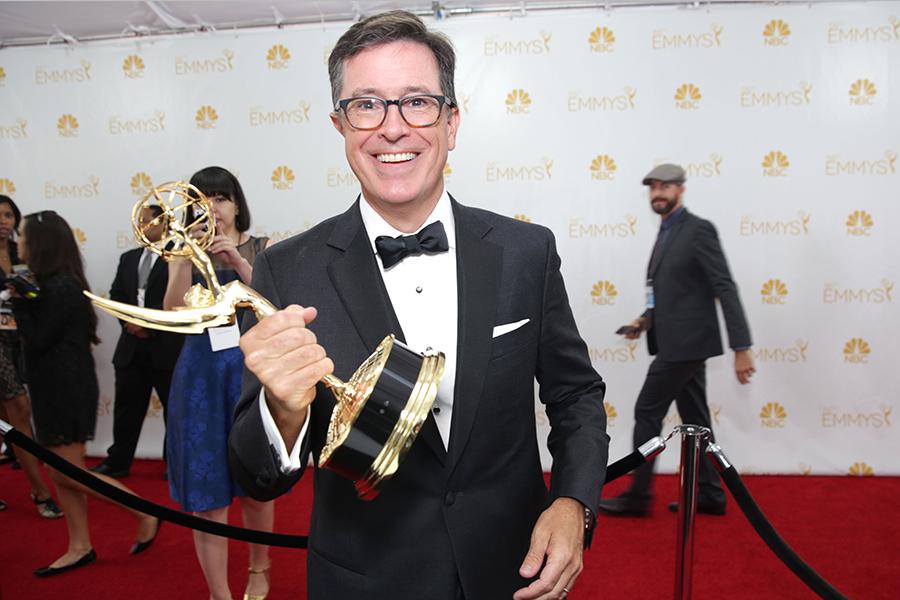 Good Morning and welcome back to the Scuttlebutt.  Pour a cuppa joe, and let’s talk.

This guy hosted the Emmys.  I mention that, because based on the ratings, no one saw the damn show, so you may have missed it.  Well, truth be told, you didn’t miss anything, but therein lies the tale.

Yes, Colbert hosted the Emmys but before he did, he made a statement that “if you’re a fan of Trump, don’t tune in.”  Now I’m sure that he thought that would get him better ratings.  Well, not really, honestly, I’m not sure the man thinks.  But still, he must have felt, or been told, that it was, if not a good thing for ratings, at least not a bad thing.  If it wasn’t discussed then there’s a different problem. (We’ll get to that)

Fact of the matter is, the ratings for this award show was the worst in the 60-year history of the show.  Now I’m not the marketing guru that I must believe the Emmys have, but seems to me, in this increasingly competitive entertainment market, the last thing you want to do is alienate approximately half your freaking audience!  Then they doubled down on the play.  The entire show was a giant “I hate Trump, Republicans, Conservatives, and pretty much everything not Hillary or Obama about America.”

Of course, that’s really nothing new.  Awards ceremonies for media, ANY media, (looking at you here Hugos) has, with very few exceptions, (looking at you here Dragon awards) become a giant virtue signaling, participation trophy game.  “Oh, you tanked at the box office? Bummer dude.  But you “spoke truth to power” (ignoring the fact that the left has been in power for twenty years).  So, here’s a pretty statue.”  Of course, the number of awards ceremonies has gotten ridiculous too… the Granddaddy of them all, the Oscars, the Emmys are almost as old, there’s the MTV awards (remember when they played music?) there’s the “People’s choice awards” (funny I’ve never been asked, am I not people?  I always figured the people’s choice was indicated by the number after that lovely phrase “pay to the order of William Lehman”, but that’s just me.) Then there’s things like the Nickelodeon awards, and the BET awards (someone has to explain to me how it’s ok to have “Black Entertainment Television” and the Hispanic network, and so on, but if you were to have a network called the white man’s network, you’re a racist and deserve to die)

The point being, there’s so damn many awards shows that I’ve proposed a few times that we should have an awards show award show.  With giant gold-plated hams, for “Best Opening Monolog”, “Best Fake Sincere Acceptance speech”, “Best Virtue Signaling by a Multimillionaire”, and more…  In an over saturated audience like this, with 600 plus TV channels, the internet, video games, movies, books (some of which were written by yours truly) and so on, pissing on your audience just isn’t smart. If the network and the other sponsors don’t understand it, well they’re drinking their own ink. That’s the sort of issue that causes most of the major news agencies to still be calling for Hillary to win the election, with enough votes already in that it was a statistical impossibility.   That sort of willful blindness cost an election, and could cost networks and other major companies to go under. Well done Colbert. Of course, his guests helped.

Just for the record, it’s just as racist for a Black woman to say, “I want only Blacks to win these awards”, as it would be for a German American to say, “I want to see nothing but Germans up here.”  No, I didn’t say White, what do we all look alike to you?”  Seriously though, how about, “I want to see the best damn performers in the business up here?”  Oh, enough about this, you get my point. (or you left after the fourth paragraph).