As We Relieve the Watch 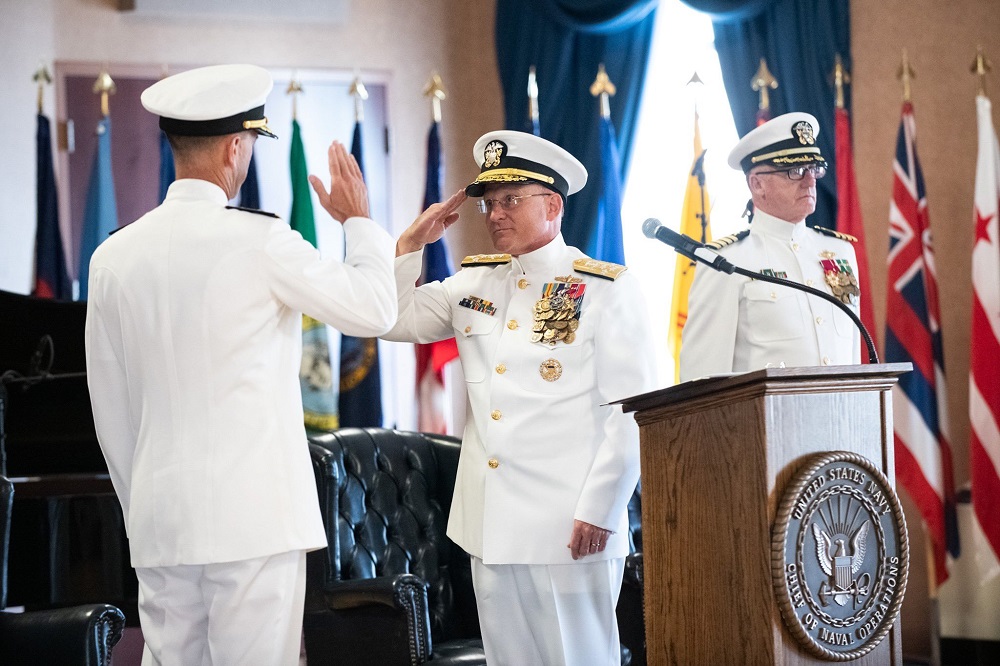 Have a seat, and let’s talk of the Navy, the future, and the past.

Our former Chief of Naval Operations (that’s the senior officer in the Navy) Adm. Richardson, stepped down on the 22nd of this month, to be replaced by Adm. Gilday.

Adm. Richardson gave a wonderful speech about how the world we operate in is much different than it was four years ago, when he stepped up to the helm.  He’s right, and a fairly large part of it sits on his shoulders.

This isn’t just Monday morning quarterbacking, I’ve been saying all along that we were striding with confidence down the wrong path, and setting ourselves up for a fall.  Well, the fall happened on Richardson’s watch. Let’s catalog it, shall we?

Over the last ten to fifteen years, we’ve been steadily de-emphasizing things like Old school Navigation (hell they got rid of Quartermasters as a rate on submarines for fuck’s sake!) Surface and Submarine Rules of the Road, all of the basics that are called SEAMANSHIP, to the point that civilian mariners I know fear operations in the vicinity of US warships, not because of the power inherent in their weapons systems, but because they might do something stupid, and ram them.  They did away with the SWO (surface warfare Officer) school entirely… and we paid in blood.

We’ve been deemphasizing Basic knowledge of maintenance for even longer than that.  Some stupid bean counters in that funny five sided building looked up in the mid 90s and said “We spend all this money training these technicians to be the finest maintenance technicians in the world, and then after 6 years they get out, and get a job with a civilian corporation.  It costs too much! Quit training them to do the hard repairs, we can have a civilian do that, and cheaper.

Well let’s look at how that really works sparky.

Well, we finally figured this shit out, and they’re starting to turn it around, but it took a long time to destroy the fleet I sailed in, where we could rebuild a Control valve from raw steel, underway, on station, and have it good enough that the yard put it back in, and just gave us a spare.  My shipmates and I regularly were able to fix things that were supposed to be “depot level” repairs, because we fully understood our gear, and had a strong background in the basic stuff as well as how the actual system we were a tech on worked. It took twenty years to destroy that fleet, it’s going to take another twenty at least to fully reconstitute it.

Further sins to lay at the feet of the outgoing regime: We, the Navy have been “McNamara-ed”.  If you don’t remember, he was the idiot who’s Gee Wizz boys thought that “transformational technologies” would win us a nearly bloodless victory in Viet Nam. That shit didn’t work so well then, and it’s echo here and now doesn’t work any better.  We bought into the LCS fiasco, a ship class that is 14 years old, counting from the launch of the first one, and has yet to complete a successful deployment, without having to be towed, or otherwise breaking down. A class that even it’s supporters admit is not capable of surviving in a “contested environment”.

What fucking good is a warship that you can’t sail into a war-zone???  We’ve got 16 of these abortions, with a few more still on the building ways.  Adm. Gilday, for your love of the Navy, shut this fucking program down!

Get us something like a real warship, with a full crew.  Even if it’s a foreign design, and there are a couple quite capable ones out there, the German Sachsen class, the De Zeven Provincien class, the  Fridtjof Nansen class, the Álvaro de Bazán-class are all allied designs that we could leverage, fix the minor problems with and have a platform as capable as the O.H. Perry’s where in their day.

We’ve also lost the big picture due to the bean counters in the aviation community.  Yes, I realize that using a common airframe makes maintenance less expensive. (If you actually had sailors that knew how to fix the damn things.) BUT, Lehman’s first rule of tools will not be denied: The more things you ask a tool to do, the less well it does any of them.

Think of your standard Leatherman,  Oh don’t get me wrong, I carried one for years, and you’ll still find one in every car, truck, backpack, etc that I own.  If you have nothing else, they’ll do in a pinch, and often they’re the difference between “stopped” and “OK let me fix this and we’ll go on.”  BUT, when you have to do real work, do you want to tear apart your engine with one??? Hell no, you want the tools designed for the job! Well guess what wonder-boys, Combat is a job!  A designed tanker is going to do a better job than putting puppy tanks on a fighter, and calling it a tanker. A designed Electronic warfare bird is FAR more effective than a fighter with an ELINT package strapped to it.  And all of the rest of the aviation roles are the same… yet we’ve got the poor damn F/A-18 frame doing everything in the Navy except ASW (anti-Submarine Warfare) and COD! I’m surprised some idiot hasn’t designed a pod to carry under the fuselage to let it act as a COD. (Carrier Onboard Delivery, AKA the carrier’s pick up truck.)

Then there’s the STILL active push for “unmanned ships”… We’re talking robot warships here, operating without a crew, sometimes just as sensor platforms, (and then autonomous,  Where anyone with a big enough ball sack could take her over) sometimes actually ARMED. Further, there’s this idea that we can count those as warships toward getting up to the ship numbers we want!

Adm. Gilday, I am fully aware you were well trained on nuclear power, so let me ask you this, if we don’t trust robotic controls to run a nuke plant (and we most surely do not) why in the world would we trust an entire SHIP that’s robotic??? Can it really defend itself, and can we defend a robot killing humans in self-defense???  Can we even keep it from being boarded and captured by oh say IRAN? Gosh, what a great way to bootstrap your tech base, capture the state of the art robot anti swarm or anti-submarine vessel of your enemy, and reverse engineer that sucker!

Now as an escort, with control vested in the escort vessel (ala the Boeing “wingman” program) OK, I can see the utility of a FEW of these… But they’re not warships, and if we lie to ourselves and count them as such, we’re going to end up regretting it.

Look, I know that this wasn’t all Richardson’s fault, the problems started with his predecessor’s predecessor, or before.  But there’s this Navy tradition, if your watch is when it all went to shit, and you didn’t stop it, you own it.

Richardson’s speech was long on things “that are just around the corner”.  That’s a pretty way to wind up losing a war. Hitler’s Germany kept coming up with “wonder weapons” that would “turn the tide” and make up for the lack of numbers, the lack of industrial might, and the lack of manpower… And the allies, who started out behind Germany on everything except heavy bombers, and industrial might, destroyed the German war machine utterly. Wonder weapons are not, cannot be the thing you rely on to save your ass, it’s NEVER worked against a peer or near peer competitor.  (Oh yes, I know, wonder weapons destroyed Iraq’s army… I said peer, not trumped up Third world idiots, I’m talking about China or Russia here.)

We’ve neglected too much shit for too long, ship maintenance, training, (and I mean GOOD training, in maintenance, in ship operation, ship repair, in AAW, ASW, ship to ship, all the things that make a Navy, a Navy, and not just a bunch of boys playing on boats.) Adm. I realize the rot, including the rot that caused 5 firings of command level men in five days, and the removal of court-martial authority from a major regional command was going on before you relieved the watch.  Sir, you were ineffective at fixing it. Too little, too late. You own that.

Adm Gilday, Sir I would not have your job right now for any amount of money.  I hope to hell they picked the right man, and I hope he can find a DAMN capable staff to take care of the details.  Your job is going to be to make the painful choices. To tell the Gee Wizz boys that their baby is ugly, and will never be able to hold its head up, or breath on its own.  You’re going to have to be the one to tell the congressman that “No, I don’t give a damn that the pretty “job creating project” you got some guy to buy off on means a lot to your voters.  It doesn’t do what we need, and it gets the AXE. And you’re going to have to tell a lot of people that they’re going to have to learn shit quick, and get better quick, it’s going to be 20 hour days, and eating while working for a while.  It’s not going to be popular. But it’s the only way to fix this, and if you don’t fix it, it will just get worse. And then, in four years, it will be your legacy, that you didn’t fix it.