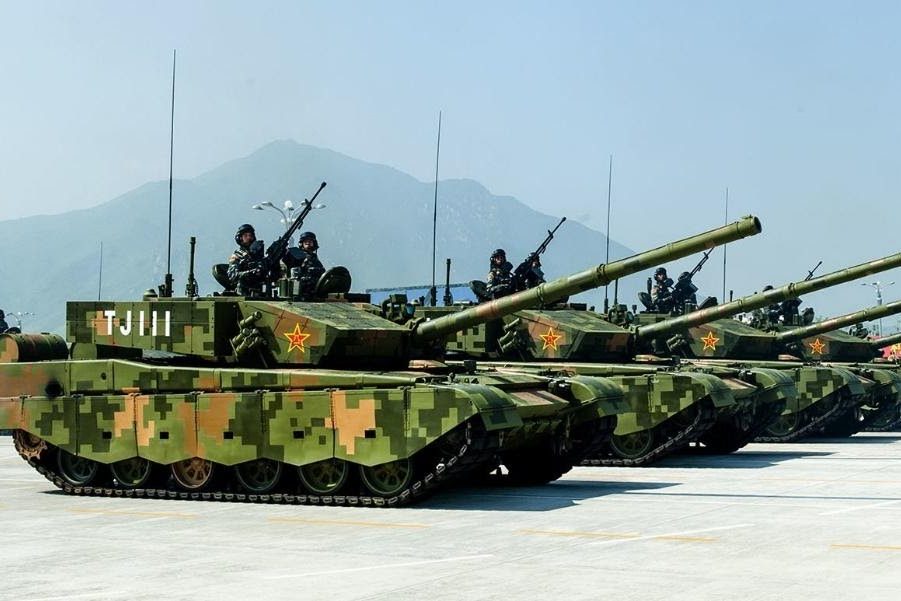 Have a seat, and pour yourself something, I have a couple of things to bring up.

So, the first clay pigeon in the air today is the Marine Corps, and it’s not just me shooting at them, it’s the Army.  See those things up in that picture?  Those are Type 99 Main Battle Tanks, China’s answer to the M1 Abrams.  What’s that got to do with the Army beating up the Marine Corps brass?

Well, if you’re a regular here, you might recall that a short while ago, I raised a fuss about the Misguided Children having made the decision to get out of the tank business.  This in spite of the fact that the Corps has solidly identified Island Warfare and war against potential enemies in the Pacific as their primary reason for existence.  (Yes China, that means you. Along with North Korea, and any other island group that decides to do stupid stuff.)

See the Corps Commandant figures that tanks just aren’t viable when you’re doing amphibious assault.  Well, the Army figures the commandant is an idiot, and that it will end up with the Army having to use Army tanks in support of Marine Corps troops.  This never works well. It’s the PRIME reason that the Corps has their own air assets, had their own tanks, and their own light artillery.  The Marine way of war just doesn’t jive with the way the other branches fight, with the exception of the Navy, which is, after all, the heavy artillery for the Corps.

The Chinese seem to think that Armor in island fighting is practical as hell, they do all their training with combined arms.  They conduct that training to the tune of eight to nine thousand tanks worth of combined arms.  Fortunately, most of them aren’t this new Type 99, but enough of them are to make a thinking man nervous.  Among the toys this thing brings to the field is some damn good explosive reactive armor.  Against DU penetrators, that’s a “so what?” But against man-portable Anti-Tank Missiles, that’s a very effective piece of equipment.  Further, it carries a Laser Detection System.  Since most of our Anti-Tank weapons use a laser to target designate, that matters.

In short, this tank is designed to face up to infantry with the best ATMs and win.  What it’s not quite as capable of is facing off with an Abrams… except, OH WAIT, the Corps is getting rid of those.

Now let’s take a breath here, and remember that the data coming out of China on their equipment is always a lie, and it’s very predictable in how they lie.  They always paint their stuff as better than it really is.  We, in general, either tell the capabilities of our gear or most often undersell.  And the stuff we give to allies (with about four exceptions: Israel, Canada, and Australia and Japan and not always them.) is ALWAYS less capable than the stuff we keep for us.  That’s for two reasons, one; most of our allies leak like a sieve, and two; today’s ally may be tomorrow’s enemy, isn’t that right Iran?  (yes, for the young children in the audience, Iran was once our ally, until the Iranian revolution in ’79)

So, I honestly expect that much like the Foxbat MIG 25, (which was thought to be the aircraft that would kill everything NATO had and be home in time for lunch…) Once we get ahold of one, we will find out that its amazing capabilities are, well, not as advertised.

But you can’t BET A WAR on that.  You must expect that the enemy is actually better than they say they are, just in case.  And if this thing is better than China says it is, well, facing it will be exciting.

Why am I talking about this?  Other than the obvious, that if even the Army can figure out that the Marines screwed up, then it’s time to rethink your position, Commandant… there’s also this little tidbit:

The highest-ranking Officer in China just pronounced to China’s Central Military Commission, on the record, publicly, that “WAR WITH THE US IS INEVITABLE.”  This is the sort of thing that your top general doesn’t say in public if you aren’t serious.  Now, MY attitude about that would be “OK, if you think it’s inevitable, then let’s open the ball right now before you get any bigger.” (So it’s probably a good thing that it’s not my call.)

Of course, the wild cards here are India and Russia.  India likely comes down on our side or stays neutral, but I suspect China won’t let them stay neutral…They have a shitload of armor and infantry sitting on the India border, and if we were able to shut down their ports, India would be invaded to capture new lines of communication.  Russia? Anyone’s guess.  North Korea wouldn’t be smart enough to sit still and shut up. They would make a play for South Korea; Japan gets involved on our side for sure…

If I were planning the war, I would try to keep it limited, I wouldn’t use nukes, and I damn sure wouldn’t invade the Chinese mainland.  I would try and keep it naval and air; shut down their ports, take out their shipping, capture or destroy the bases in the Spratlys, sink anything flying a Chicom flag, including their fishing fleet, and try to control the Chinese airspace for at least 500 miles inland.  Then I would start a campaign to support the Chinese people against their government.

Of course, if I’m playing the Chinese in this little wargame, I would want to make it a land war, and I would want to do it by surprise.  Think Germany in 1939.  I would aim to own all of the pacific islands out to midway at least, as well as India and the rest of Asia.  I would aim to cow the Americans into a negotiated peace that favors me.  This battle plan didn’t work well for Japan, but if I was China, I would bet that the US of 2021 isn’t the US of 1941.  It’s risky, but it’s the only play they have, and they’ve placed a lot of chips on the US being no longer capable of the sort of total war we fought in WWII.

Now I can’t let the USN get off unscathed, first, we’ve decided to bring back the US First Fleet.  Look, the idea of designing a fleet and aiming it directly at China, that’s a fine idea, but the reason that we renamed that fleet the first time, was that on December 6 1941 the Commander In Chief First Fleet was, officially on his letterhead as used by his Pearl Harbor Office, “CINC US 1st” Pronounced “Sink us first”.  Let’s just not invite trouble, shall we?  Then there’s all the bla-bla about autonomous warships to act as force multipliers for the fleet.  I fear we’re spending way too much money, time, and reputation on yet another gee wiz project.  Let’s go back to building warships with crews, that we know are capable.

The very idea of an autonomous warship flies in the face of what we’ve learned from the little crappy ships.  They don’t have enough crew to do the maintenance, and they’re falling apart.  We can’t keep them running, and we’re finally admitting it, twenty years and unknown billions of dollars too late.  In fact, the best idea I’ve heard recently for those things is to make them into reserve training vessels.  Let the weekend warriors have them, put a permanent crew of TARs (training and administration of reserves, reservists on full-time active duty) on board, and augment with reservists like we used to do some of the frigates and older DDGs.  Then at least we would get some training value out of those wastes of displacement.

So now we want to build ships with NO crew to do repairs or maintenance?  How are they going to stay running, pixy dust?  The sea is a hostile environment, and it’s not like the air.  An aircraft, including the unmanned drone type, only stays in the element it’s designed for, for about ten percent of its life. One hour of flight time gets it ten hours of maintenance. That’s not what a ship’s life looks like.  It spends almost 90% of its life in its designed element, the water.  Further, when an aircraft spends 24 hours straight in the air that’s considered super high endurance stuff.  Warships routinely spend 240 days away from a maintenance port, at sea.  In conditions like this, SHIT BREAKS.  That’s what over half the crew of a ship is for: fixing shit.  Who’s going to fix the drone ship, when fifteen days out at sea, the main seawater cooling pump sucks a fish and shits itself?  Now you either leave it in the lurch, a damn expensive buoy, or you have to do an at-sea transfer of men on board to fix it. During a storm possibly, or with hostile submarines or aircraft in the area?  Damn it, quit wasting money and time on pie in the sky stuff, when we’re being outbuilt by a declared enemy.

Finally, I’m going to call your attention to the case of Amir Hekmati.  Hekmati was a US Marine, an American citizen, and a veteran of the war in Iraq.  After his honorable discharge from the USMC, and a brief stint with a DOD contractor doing intelligence analysis, the story gets muddy.

Hekmati says he went to Iran to visit an ailing Grandmother who was still in Iran (Hekmati’s parents were legal immigrants to the US from Iran.)

Iran says he entered Iran to spy for the CIA, imprisoned and tortured him.  After four and a half years, he was traded back to the US, along with several other US citizens in a deal some of you may remember… Where the US literally flew over a few pallets of Benjamins in return for our people.  He was at that point designated to receive $20 Million from a fund designed to recompensate victims of international terrorism, including state terrorism.

But suddenly, the FBI decided that Hekmati was actually going to Iran to sell secrets to the Iranian government.  They froze the money and kept him under investigation through the current day.  This investigation has apparently been going on since 2011 when some FBI type came to the conclusion that Hekmati was planning to be a traitor.

Yes, you read that right, he’s been under investigation for ten years.  In all that time, they haven’t been able to find enough evidence to charge him.  Yet, they’ve frozen his payment as granted by the courts in a suit against Iran for capture and torture and concurred on by the guy who runs this special payment fund.  He (Hekmati) is currently suing the DOJ for the money, demanding that the Fearless Band of Idiots “put up, or shut up.”

I agree.  If you can’t find enough in ten years of investigation to make a case against someone who served our nation honorably, was captured and tortured by an enemy nation, and eventually freed, it’s time to give it up, and pay the man what the courts said he was entitled to!  Look, I suppose it’s remotely possible that he did plan to turn over secrets to Iran.  But if you can’t find that proof after ten years?  And he can prove that he was imprisoned and tortured by the people you claim he tried to sell secrets to?  Dude, put down the crack pipe, and step away.  Pay the man!  If you want to continue to investigate him AFTER you pay him, FINE, have at!  But DAMN SON, you’re grasping at some mighty thin straws.