An Injustice in the Bergdahl Sentence? 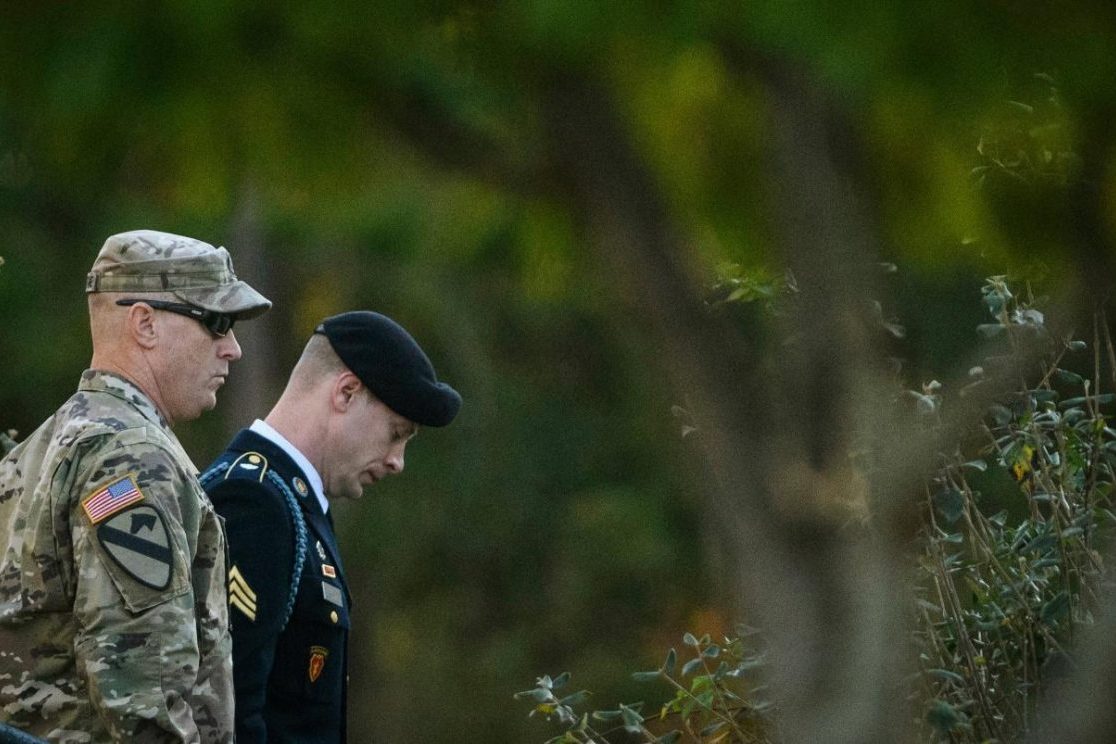 Ships Company, ATTENTION TO ORDERS!  Welcome to a special edition of the Scuttlebutt.  Parade REST.

This is not going to be my normal, kindly senior noncom type discussion! Sadly, I have another one of these to generate as well, because the final report is out on seventh fleet’s complete incompetence, but I’m going to save that for another day, because this is just too stupid to ignore.

A gentleman by the name of Robert Cuthbert has published an OPED piece in the NYT this A.M. by the same title as this little tirade. You can find it here: https://www.nytimes.com/2017/11/03/opinion/bowe-bergdahl-sentence-benefits.html?emc=edit_th_20171104&nl=todaysheadlines&nlid=28200476

If you want to put yourself through the nausea.

Mr. Cuthbert is a Veteran, as I am. He however, spent the years after his service quite differently. His byline states that he “formerly managed the military discharge upgrade clinic at the Veteran Advocacy Project of the Urban Justice Center”.  Well, when you look that up, you find that, in their words:

“We run one of the few legal programs in the country that focuses on military discharges.  Members of the military leave service with one of five discharge statuses that will determine their access to VA health care and benefits. Post Traumatic Stress and Traumatic Brain Injury wreak psychological havoc on our servicemembers and the resulting behavioral health problems can easily lead to bad discharge papers. In other words, veterans need treatment for the condition that got them cut off from treatment.

Now that all sounds incredibly noble, and has without a doubt influenced Mr. Cuthbert’s perspective on things, either that or he was always this way, which influenced his time in the military and caused him to join this sort of outfit after service. If he had always been this way it would explain much, including his apparent dislike and disrespect for the service.

I have a back story TOO. My back story includes a final detail before retirement as the Work Programs Director for the Puget Sound Regional Brig (that’s military for prison).  Based upon my experiences both in and after the service, while there are some miscarriages of justice, in both directions:

(I saw a Master chief get railroaded because he had pissed off the commander of the Coast Guard district by NOT being a complete asshole.  I also saw people get OTHs just because the Navy or the Army just wanted to get rid of them and it wasn’t worth dealing with the trial… Often the service member was waiting to be turned over to the civilian justice system when we got rid of them, so the powers that be decided to let the civilians deal with them.  Not our most honorable move, in my not so humble opinion, we let the Civilian courts pay for punishing someone we should have been responsible for.)

Most of the time, especially in high profile cases, the sentence was firm but fair.  I never met a “guilty” man in the Brig. They all had a story or an excuse, including the guy that came home, shot his wife (also a sailor) put her body in the trunk of the family car and drove around with it for three days before turning himself in at the gate guard.

The organization Mr. Cuthbert belonged to firmly believes these whiny ass excuses for why Private Numbnuts didn’t deserve that Bad Conduct Discharge.  “Yes, I decked my CO, and fought with the MPs when they tried to apprehend me, but I’ve got TBI, (gentle sob) I didn’t know what I was doing.”

BULL FUCKING SHIT. Look, we all had bad experiences in our lives, whether we served or not.  Most of us don’t go and beat the shit out of our wives, or sell cocaine to our shipmates, or run a prostitution ring on our carrier, or film the repeated sex acts we have with our 9 year old mentally retarded daughter! (yes all of those were prisoners or detainees of mine)

Now all of this is pertinent, because Mr. Cuthbert tries to excuse Bergdahl’s acts, because he had a hard time as a POW, and may have been at reduced capacity when he deserted his post.

When I went through the military justice system training in boot camp, (which is as much as most troops ever get, my later training in it was as a Law Enforcement officer, and as a Brig Manager)   It was made perfectly fucking clear to us that Desertion in the Face of the enemy, (article 85 of the UCMJ) got you one sentence and one sentence ONLY. Death by Hanging.

“I was marching to another base to blow the whistle on a commander I believed was incompetent and dangerous”??? OH BULL SHIT.  And frankly I don’t care. You deserted in the face.  You confessed to that.  You got good men killed and badly injured trying to save your sorry ASS. (one of them was my son in law)

Mr. Cuthbert wants us to be concerned because Bergdahl won’t be able to get the help and treatment he needs to successfully reintegrate into society, and is at higher risk of suicide.  (Hey, Bergdahl, if you read this, remember, go running first, take a hot bath, cut up the street, not across the block.  Don’t try pulling something into the bath with you, like a hair drier, the GFI will keep you from dying. Do something right for once in your misbegotten life)

Cuthbert tells us how horrible, and absolutely inconceivable this fuck’s treatment by the Taliban was.  Yeah, well Bergdahl stated a few days ago in open court that his treatment by the military justice system was worse.  I ran a brig.  I know how he was treated, and it will all be on film (figuratively speaking) there’s cameras everywhere and they’re always on record. Look being in a brig sucks.  It’s supposed to.  But compared to oh say Gitmo, much less some foreign prison, it’s a walk in the park.  Partially because the staff knows that everything is on record, and if they mistreat one of these dirt bags, their slimy ass lawyer will get their sentence reduced or removed because of correctional misconduct.  No one wants to be the guy that lets some baby rapist off with time served, because you yelled at him, or didn’t let him have enough time in the shower.

I’m not saying Bergdahl didn’t get treated badly by the enemy.  But you can’t have it both ways.  You can’t have “he was treated worse than the military has seen in 60 years” (uh that would include Vietnam and the Korean war you moron.  I don’t see rat chewing marks on the boy, and they didn’t try to skin him alive.  So you’re a liar.) and “he was treated worse by the US Government than the Taliban”.

Cuthbert says that Bergdahl “returned to rampant slander, and unsubstantiated rumors of treason”.  Hey dumbass, desertion in the face is treasonous.  By definition, it provides aid and comfort to the enemy.  It also got five high value enemy commanders released in a trade for his sorry ass.  He (Cuthbert) also complains because President Obama wouldn’t spend the political capital to resolve Bergdahl’s case. Then in the very next sentence complains because President Trump said not nice things about Bergdahl, because it was “undue influence”.  Again, you can’t have it both ways boy.  You whine because one president doesn’t use undue influence to bury a case, then whine again that the next president says the shitbag is a shitbag and should be shot???

He claims that Trump’s statements are jury tampering… I think you need to read a few law books old son, I don’t think those words mean what you think they mean.

He complains that Bergdahl, with a Dishonorable Discharge (DD) will be denied most military veteran’s benefits, and won’t be recognized as a veteran.  Again, lad, you need to break out Webster’s. What this douche-canoe did was the very definition of dishonorable.  He lost the right to those services given to veterans who honorably served their country.  My family has been going through boot camp since we got to this country in the 1800s and the deal has always been the same.  You do honorable service, we will do some things for you, after.  HE broke the contract.  It’s NOT our responsibility to “heal him”, because he didn’t hold up his end of the deal.

Now among all of this whininess, smoke and mirrors, Cuthbert has one valid point.  Bergdahl had been diagnosed with Schizotypal personality disorder, and probably should never have been enlisted in the army.  Then he blows it by saying that “had his illness been treated before his crimes, he would have been eligible for an honorable discharge with benefits”, and calls him an “exemplary, idealistic young soldier.”  Yeah, and Lt. Calley was a young, idealistic, model soldier too, until he ordered the murder of 22 civilians.  I’m sure several of the residents of “plot E” in the Oise-Aisne American Cemetery in northern France (where we buried the “Dishonored dead” executed by hanging or firing squad during and after WWII) where exemplary, idealistic young soldiers too, until they committed rape or murder, or desertion (hello Eddy Slovak. Actually, Slovak and another criminal, Alex Miranda, were disinterred and returned to the US, but the point remains.)

Then Cuthbert starts agitating for the sentence to be reduced either by the military review, or by Civilian authorities if the military doesn’t do it, demanding that they show clemency, so that Bergdahl can receive the benefits that he needs to heal and to lead a long life…  Hey, asshole! He should have hung.  I don’t want him to lead a long life!

“Sergeant Bergdahl’s military service cannot be reduced to his crimes. I would argue that his profound and unexpected contribution to the military truly began the day he was captured.”  Say WHAT??? The claim is that Bergdahl gathered a “gold mine of intelligence” (bullshit) and that his exemplary service as a POW would direct and inspire the survival of other POWs… (more bullshit), he goes on to demand that congress get involved and send a letter to the Secretary of the Army, if needed, to get this boy a better deal, and that congress act to ensure that POWs are cared for medically no matter what their discharge.

Uh NO.  The whole point of a Bad Conduct, or Dishonorable Conduct discharge is that you did something so bad, we don’t even want to admit you were ever part of us.

In the words of George C Scott as General Patton, “OK you sons-a-bitches, know you know how I feel.”