A Sailor on Cruising 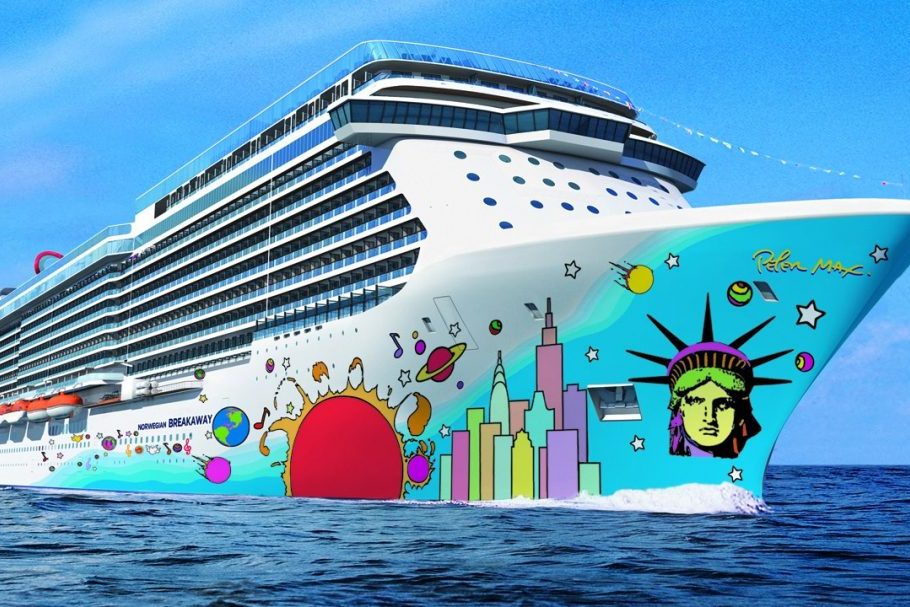 Welcome back to the Scuttlebutt. Today I want to talk to you about the “cruise ship experience”.

I had been on one small brief cruise before this one, a little three-day Bahamas thing. (This of course discounts the many cruises I went on with “the gray funnel line” IE the USN)  It was OK, but the ship was OLD (as in built in the 50s for the black sea trade) and the amenities were poor, in short it wasn’t what a modern tourist would call a cruise.

The ship above was our home for 9 days.  The Norwegian Breakaway is a huge vessel, roughly the size of an aircraft carrier (US, not one of those little European things) and was carrying about 5000 passengers.  There were Broadway shows, about 12 or 14 restaurants, a couple pools, hot tubs, many bars, etc… In short, it’s a floating city.

Let me start by saying we had a blast.  There are things I’m going to say about the experience that might lead you to think that it was a bad time.  That’s not the case, I’m just going to give you the bad with the good.

First point.  If you’re going to various foreign countries and want to do “shore excursions” do your wallet a favor and price them from some other source as well as what the ship offers.  Now if you’re going for the “all expenses paid” lines, like Seaborn, this is a different story, but if you’re in the midrange cruise ship category, anticipate that they are going to look for every chance to tack on a charge.  Sort of like modern air-travel. You can usually get the same excursion for 20%-30% less by booking it yourself or through your agent.

Second point. Get the Drinks package.  Look, most of the cruises these days are offering three Packages free.  If you drink alcohol, get the Drink package, it will pay for itself. Booze on this thing is medium high-level bar prices.  If you’re going to be on board for more than five days, and you have one drink a day, this thing pays for itself. If you’re an old sailor, well it pays for itself on the second day, if not before.

Third point, on the out in town stuff, if you’re willing to do some research, the “hop on- hop off” tours are fantastic.  Now if you can’t walk, or are too lazy to do some research on “what do I want to see in _____, the Ho-Ho tours are not for you, but if you do your “due diligence” and if you’re reading this blog, I think you’re the type that does, the Ho-Ho is the way to go.

Fourth point, The shows are a mixed bag.  The Broadway stuff was fantastic, we saw Rock of Ages, and had great fun, the cirque show was wonderful and I don’t like Cirque-de-soleil.  On the other hand, the “entertainers” ie bar singers etc, were really pretty bad. One set was English second language and they only spoke one, plus their tempo was off. Highway to Hell is not supposed to be a dirge people! Another set was OK but all they did was salsa, not my thing, and the final set, may have been ok, I couldn’t tell, because their sound guy was so fucked up I couldn’t hear the singer.  You DO NOT amplify a Grand Piano, with a woman singing against it. All I could hear was the damn instrument, not the vocals. So, see the shows, skip the rest of it.

Internet was STUPID expensive, and the “package” was still not a good deal.  Seriously, NCL, how much would it cost you to give decent internet at a reasonable price?

Food, again, a mixed bag.  The pay restaurants that we went to (we got the fine dining package, which covered three of the high-end places) were pretty great, the rest of the eateries were, well, each of them did something well, and something else not very well at all.  One had good main courses but horrible deserts, the next one had OK main courses, but bad service, and so on… One place gets a special mention. O’Callaghan’s I believe it was, had Prime Rib the first night, so we went to have some, as I don’t turn down a good hunk of beef.  This sadly was not a good hunk of beef. It may have been rib, but it sure wasn’t prime, more like 30 year old milk cow. Getting RARE was beyond them, and when we spoke to the management, he said that yes he had it and knew it was tough, to bad, next case. They also couldn’t make an Irish Coffee to save their ass.  The first one was good, that was the bait to lure you in. from then on, they were about the temperature of blood or colder, and well, just not very good.

The cruise ship idea of breakfast is another oddity.  Beans for breakfast? Really? As for their ‘southern biscuits and gravy’, oh my… a teaspoon of (actually fairly good) sausage gravy, put a biscuit half on it, pour a teaspoon of gravy over that, put two sausage links on top, then a half inch thick slab of fried red tomato, and the other half of the biscuit.  I shit you not.

For rooms, we got the smallest rooms with windows that they had.  They were fine. Plenty of room, nice amenities. The biggest gripe I had was no chair for the desk, and I get a backache typing without back support.

Don’t buy stuff at the onboard store.  Seriously, the prices were 140% of out in town prices, on amber and such they were even worse than that.  On the other hand, the last day of the cruise they discount the hell out of the clothing, and at that point, it’s a good deal, picked up a nice windbreaker at a very reasonable price.

Bars.  Look, you can’t call yourself a bartender if you don’t know how to make the classics. I wanted a basic Manhattan. (I was tired of the sweet drinks that are their standard) only one bartender in the entire boat could get a Manhattan right.  It was sad.

But my big complaint, I alluded to before.  Seriously Mr. cruise ship director, quit trying to nickel and dime people for petty shit.  It makes you look small. I was behind a woman who was contesting a charge for a case of bottled water, because the room steward had found an empty water bottle in the trash.  On the way out each day, they’re offering water and soda as you’re stuck in line to get off the boat for the day. They want $5.00 for a bottle of water, and your drink pass doesn’t cover that.   It’s stuff like that, that I’m calling you on.

There was a lot of fun things to do, and some of the food was very good indeed.  There just isn’t enough time on any of the shore excursions to see everything you want to see, but if you look at it as “a scouting expedition” for places you want to go to later and spend more time at, you’ll be fine.

We’ll do another one of these, either with NCL or with one of the “all inclusive” line.  We did have a great time, but an honest review requires that I call out the good and the bad.

Well, I have to get on a plane in a few hours for business, so I’m going to shut this down.  Stay safe, until next time,