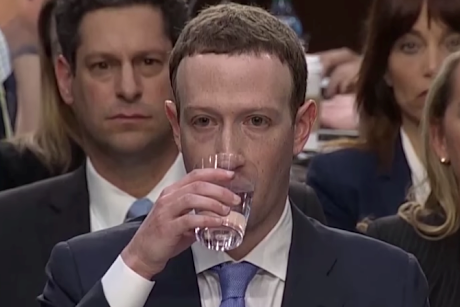 Before we talk about Zuk’s really bad week, a quick nod to a couple SF/F items:

“Venom, There Will be Carnage.”  Look I don’t remember the graphic novel versions, so the movie may not be true to them…

Don’t know, don’t care, how’s that? I found it to be a fun little romp, worth the trip, but then it’s Marvel, so unless they go all woke, most of their stuff is worth the trip.  Since this wasn’t a woke-fest, it was good fun.  You could do worse.

Second item, if you somehow missed it, Bill Shatner is going into space.  Yes, that’s right, Captain Kirk bought himself a ticket on Blue Origin’s next rocket.  If you don’t think that’s some cool stuff, well I don’t know what to tell you.

And one piece of Navy stuff, if you missed it, Not only is Fat Leonard back in the news doing a podcast (I would love to see the Navy SEALs make that bastard’s birth certificate rendered irrelevant.) We have a NEW piece of “how to rip off the Navy 205: extreme graft for fun and profit.”  Multinational Logistics Services or MLS, a contractor out of Bahrain that provides maintenance and port services (that means things like power to the ship when she’s tied up, line handlers, stevedores to load food, etc…) is accused of ripping your wallet off for $50,000,000 over the time period from 2011 to 2018, as quoted in https://www.military.com/daily-news/2021/10/04/navy-officer-turns-witness-bribery-case-echoes-fat-leonard-scandal.html?ESRC=navy-a_211006.nl A sailor (officer) has turned states evidence after taking bribes in excess of $33,000.  Opps.

Now let’s talk about Zuk, and the internet.  If you some how live under a rock, First off, how did you get to read this piece?  But more to the point, Facebook and it’s owner have been having a really bad week.

On Sunday, one of his former executives, Frances Haugen, who turns out to be the whistle blower behind the data that the company knew Instagram was harmful to teens, and intentionally covered it up for the sake of profit, showed up on “60 Minutes.”

That alone would make this a BAD DAY, if not a bad week, but wait there’s more!

Again, if you didn’t know that this happened, your address must involve a PO box, but Facebook and ALL it’s subsidiaries went full dark for about half the day on Tuesday.  (That cost Facebook and company 123 BILLION dollars, in stock decline alone, lots more in loss of revenue and other such things. https://techcrunch.com/2018/07/26/facebook-officially-loses-123-billion-in-value/ )

It also showed just exactly HOW MUCH of the world is beholden to Zuk for various services. I can’t find anything that even speculates on how much money was lost by various merchants that survive via the various services that F/B and its subsidiaries… But I can guarantee that the world-wide damage was greater than the damage to F/B itself.

Now, THAT is important because at the same time that Facebook is demonstrating how much of a monopoly they have on international trade, they were asking a federal judge to throw out the Federal Trade Commission’s Anti-Trust lawsuit, alleging that “The agency has no factual basis” that F/B is a monopoly, and the case is based on “guesswork rather than facts” in it’s claims about market share…

Uh if you don’t see how having one of these things happen, right as the other one is going on, makes for a really shitty day for a certain pencil necked geek, please go away, and never read this column again, you’re not the target audience… I’m aiming for folks with better than a room temperature IQ.  If there was ever any doubt that Facebook has a monopoly this little crash pretty much proved it.

If that wasn’t enough, Ms. Haugen (oh, sorry her pronouns are they and them… WHAT EVER) went before a Senate Subcommittee to testify on the same stuff that she talked about on 60 Minutes, while advocating for more Government control of the company.

Let me make clear that I do not advocate for government control of the company EXCEPT in the form of either breaking it up (Ma Bell, white curtesy phone please.) OR in formally calling it a content provider which means they can be sued for damages, when they pull shenanigans, just like a newspaper, or TV station.

Facebook has been very firm that this was NOT a denial-of-service attack, a ransomware attack or anything else, claiming it was a accident, compounded by stupidity.  The conspiracy boys and girls are all thinking it was an intentional event to destroy the evidence that Ms. Haugen has brought to light.

Let me explain why I don’t buy either one of those ideas.  First off the “it wasn’t an attack” piece.  By itself, taken in a vacuum, I might believe it, Gods know people do stupid shit every day.  BUT, at the same time that FB went dark several .GOV sites shit the bed, some of which STILL aren’t running.  Hell, I couldn’t even pay my people so far this week, couldn’t access stuff I need to access for work, in general a lot of the US Government presence caught a bad cold for a day or so, and some of it still has the sniffles.  Well, when you combine that with the standard cyber-training security stuff about how many thousand attacks a day the government gets on it’s web presence… I don’t believe in that sort of coincidence; I smell a RAT.

As to it being intentional, I mentioned the absolutely horrible timing for proving just what a monopoly that smug little shit is running… He’s NOT STUPID.  Taking it all down while a judge is trying to figure out if you’re a monopoly, IE while the Super Trooper spot is aimed directly at you, is absolutely the wrong time to PROVE you are.  Wait until someone else walks on stage and grabs the spot, then burn the evidence.  Getting your monopoly forcefully broken up is going to be way more expensive than saying “oh, I’m sorry we didn’t mean to hurt little girls body image, here honey, here’s a nice little piece of candy, go play now.”  Even if the candy is a few million bucks.  Zuk didn’t get where he is by not being able to figure that shit out.

Hey, it’s been a long day, and I need to wrap this up, so please watch your six out there, it’s getting stupid out:

Oh and just by the way, the Seattle PD says 1/3 of their officers have not reported has having gotten the jab, and don’t have an exemption… that means that unless the city and the state blink, all the morons are going to get their way… Defund the cops will become a totally real thing, as 1/3 of an already dramatically understaffed office gets their badge and gun taken away.  If you thought there was an upswing in violence before? You ain’t seen nothing yet, babe.