A Bad Day for Boris 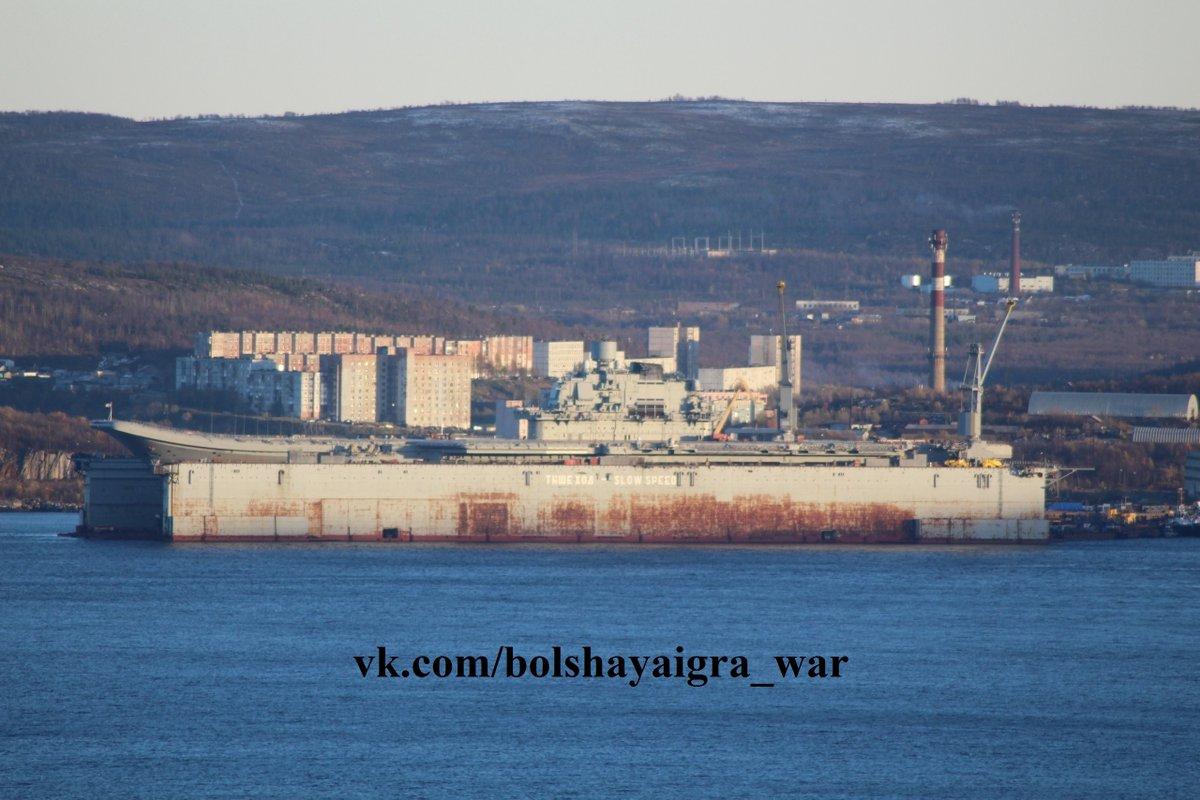 My plan for today was to talk about civility in politics, and public speech, with references to Mr. Cromwell, the supposedly well-known actor who said that if democrats don’t win this election, there will be blood in the streets.

However, the boys from the Kremlin saved me from that ignoble article by screwing the pooch in a large and graphic way.  The picture above is a picture of the Adm. Kuznetsov in floating Dry Dock PD-50. This was taken on the third of October… she looks a little different now.  Very little of her is above the surface of the bay, and the damage to the Kuznetsov is unknown.

Oh, the Kremlin says she sustained no damage, and was being floated out anyway… However, we know that the big crane you can see in the back of the DD fell across the carrier, at least one shipyard worker was killed, and well, let’s just say that the Kremlin is notorious for lying about how much damage something took.

I remember being on Active Duty when Chernobyl went down, and we were told there was nothing wrong by the Soviet Union right up until the Swedes started finding large amounts of Strontium 90 in their milk.  Then we were told: “Oh, we had a minor accident, nothing to worry about”.

Minor accident is Russian for “three reactors melted and we have a column of slagged uranium so hot we won’t even be able to get a picture of it for a hundred years, and we have no fucking idea how big around it is, because we can’t send even a robot in there because the gamma and neutron count is so high it kills ROBOTS, much less humans.”

With that experience under my belt, and reports of five meter wide holes at the waterline as they tried to float the Kuznetsov out of the wreckage… well, lets just say the truth isn’t in yet.

She was supposed to be in overhaul until 2021, so I’m doubtful that she was all buttoned up when the DD sank out from under her. So, she’s got a high likelihood of being flooded, and damaged.  Now considering the fact that she’s been a bad luck boat from the get-go, other than the prestige blow of loosing the use of their ONLY carrier, not as bad a blow to the Russian navy as you might think at first glance.

As someone with an intimate knowledge from 38 years of working in on and around drydocks, this is HUGE.  You’ve lost the only way of fixing your carrier, the only way short of either moving one of your other heavy lift docks from either the Pacific fleet through the northern approaches (oh yeah and the ice is already too thick for that this year, unless you’re planning on escorting her with ALL your icebreakers), or bringing one from the black sea, which then screws up your black sea fleets ability to do maintenance.  In effect, you’ve lost an entire port worth of maintenance capabilities, in a navy that sucks at maintenance to begin with.

Go back up and look at that picture for a second.  That rusty, ratty-ass piece of shit that the carrier is sitting in, PD-50, was built in 1976, transferred to Russia 1980.  As a counter, look at a picture of the USS Dwight D Eisenhower, a ship of almost exactly the same age. Go ahead, I’ll wait.

You back?  Good. Hell of a difference in condition, right?

It’s nice to know that we’re not the only navy that does stupid shit.  The Russian Navy will be feeling the pain from this for decades in the form of deferred maintenance, and lack of repair capability, at a time when they can least afford it, as they try to restore to effectiveness a fleet that they abandoned with the fall of the USSR.  This will make them a little less interested in getting in a shooting match with other navies, or in playing “chicken of the sea” with NATO assets.

Now if only we could have China do herself a mischief…