5 Stars Deluxe: The Top 5 Places You Have to Stay When Traveling 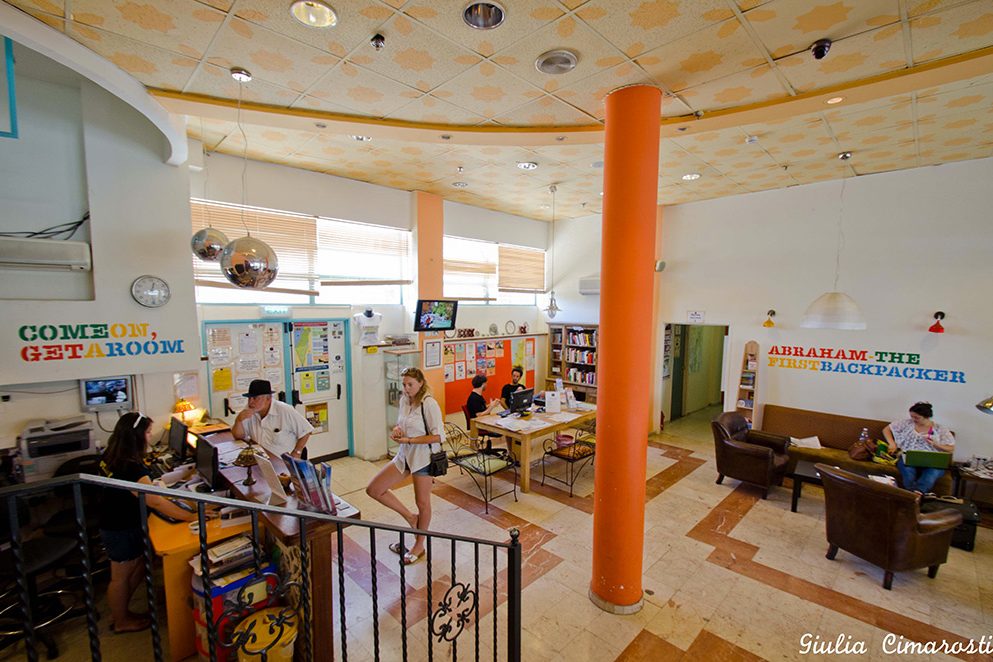 Maybe the best part of  working in a hotel is that you get lots of connections and lots of discounts. Although the salary is really bad, you still get to see a lot and people try their best to help you doing this. I simply love staying somewhere else than home, no matter if it is a hostel, another 5 star hotel or a couch in the middle of nowhere. I gathered some of these places, which stayed in my memory for different reasons.

Working in a hotel gave me some different kind of perception, I believe, and I strongly connect stories to places. Maybe these are not the “best” places I stayed at, but there are stories connected to them, either due to the people I met, the city or some special events that took place.

There will be just a short story each, but I think I will go in detail on some of them in the future.

These stories have been told many, many times. So, if we ever meet, prepare yourself for a looooong evening (Don’t worry, I make some hummus as well!)!

Let me start with a house some friends and I rented for a weekend back in October 2015. Actually it was just a weekend away from home, in the middle of nowhere, full of drinking, BBQ and yes, more drinking. Nothing spectacular actually. Anyways, this weekend stayed in my mind. 2 weeks before, I twisted my knee and my knee cap flipped out of place and found its new place on the other side of my knee… yes, it was as painful as it sounds. Fortunately there was only a little damage, but I had to wear some kind of a bandage to keep the knee straight so the ligaments could grow back together. Against the will of my doctor I went on the trip, starting with the most painful and uncomfortable 4-hour drive of my life… and also of my friend sitting behind me in the car, since the seat had to be put back as far as possible so that my leg would fit in the car. Getting in the car took around 15 minutes by the way. I needed the same time for getting up to the house which was on a small hill, actually just 100m from the car park, but so steep I couldn’t walk (haha, good one!) properly and had to sit on my butt and crawl backwards, Of course I hadn’t taken any painkillers, since I wanted to drink (and survive).

The house had 4 bedrooms, so we could easily fit in there, a nice balcony and a patio. Weather was also very good, so there was a really big BBQ. Despite all the pain I managed to get to the upper storey and got drunk there on the balcony. Ahhh, good times! Especially due to the fact that my beautiful doctor-friend had taken care of me the whole time… Sometimes, alcohol and pain works perfectly.

On my 23rd birthday I flew over to the c’ôte d’Azur/French Riviera in southern France, Nice and Cannes to be precise. During February there are nearly no tourists so I got a fairly good deal staying in the hotel with the lyrical name Palais de Méditeranné (Palace of the Mediterranean). Also, due to some connections (the main perk of working in the hotel business!), I got 50% off from all F&B, which made me one of the best steaks for one of the cheapest prices.

Flying from Dusseldorf (Germany) you first cross the French Alps. Arriving at Nice Airport, you get an absolutely stunning view, flying only a few feet over sea level, with clear water, so you can even see some fish in there. Just the flight would have been worth the money, definitely!

From the airport it’s a 50-60 minutes walk. I dind’t take a taxi or a bus, since the Promenade des Anglais, the main road, goes directly from the airport to the hotel, all along the sea. That way really gives you a vacation feeling!

There are rooms facing the water, which I was lucky to get for my first two nights (I changed afterwards to another room,but I definitely wanted to have the view). As the hotel is in a u-shape, there is a big patio/restaurant with a large pool in the middle. Really fantastic vibes, even though most of the other guests seemed to be some suit-wearing, rolex-on-their-wrists, Russian oligarch’s children or French millionaires… next to me, wearing my cargo pants, band shirt and sneakers.

The front of the house is in a typical 30’s style and beautiful illuminated during late evening and the night, which looks extra spectacular when you had a bottle of wine while walking along the beach.

If you ever have the chance to go to southern France, do it!!! One of the most beautiful and peaceful places I have been to. And make sure to get a drink in the Palais de Méditerannée, it is worth the price!

During my trip through Thailand I stayed in hostels (one is described in the next selection), but on my last night I really needed some quality (and quiet) time for myself. After staying awake for around 35 hours, after a morning of diving, a long night partying, a 6 hour stay in a Thai prison (I really can’t recommend them, don’t get on a boat that isn’t yours!) and a 11 hour bus ride with an A/C straight from Siberia, I did not want any more bunk beds, shared restrooms and non-working showers. Once again, through some relations, I got a really good deal (75€ including breakfast, spa and 4pm late check-out). I arrived at around 6pm and went straight to bed, just to be woken up from my alarm at 10 am to get some breakfast, back to sleep till 2pm and straight to the jacuzzi, where I took another nap. Getting back to business after jail is not easy.  Don’t get in there kids!

One thing that stayed in my mind was the breakfast(s). In western Europe and North America, you get the same kind of breakfast everywhere, nothing special or something surprising. In Bangkok, they had four different kinds of breakfasts, a continental/American, a Chinese, a Japanese and of course a Thai. Funny thing was, that all the guests only went to “their” area. And then there was me, getting a plate of everything. Sorry guys, you did not make any profit out of me this morning, but it was totally worth it. Did you ever have some octopus next to scrambled eggs and bacon? Everybody should have it once (Yes, it was gross).

Another fun fact: There were 24 water bottles inside the room (for free), 4 next to each side of the bed, 4 on the working desk, 4 in the bathroom, 2 in the restroom, 4 in the minibar and another 2 in the wardrobe, whatever they were there for. Funny because most of European hotels give you 1-2 max. Funny, what hotel workers think is funny.

One of the worst and best hostels at the same time! I went to Ko Tao (Turtle Island) quite spontaneously and it seemed that most of the hostels were full already. In the end I had to choose between 3 hostels, all with quite bad reviews, so Taco Shack was the “best” alternative (However, checking the reviews now, they increased incredibly).  At the same time I was kind of looking forward to sleeping in a 14-beds dorm for three nights. The maximum until then was a 10-bed dorm, and just for one night. I thought of it as an experience… and it was, definitely. I think most of you can imagine what one shower and one toilet  look like after 14 people used them. Also, they were only cleaned upon request, but it seemed either it was never requested or they did not really care.

The main building was extremely cool though. The reception also functioned as the bar (or vice versa), the music was cool and the whole place was covered in graffiti. My favourite quote is “if you pee on my bed, I’ll pepper spray your face” – Amen to that!

They also sell tacos and burritos there, though I never tried them. Could have been to the fact that I concentrated more on drinking, or it was still part of the toilet-thing, not quite sure about that.

The most fun parts were the evenings, when the whole dorm gathered on the patio. 13 people (one guy was always sleeping) from 11 different countries… what a crazy feeling! There were people from Brazil, Argentina, Canada, US, UK, France, Israel and Germany. I can’t remember the other 3, but it was truly amazing getting so many people on the same table. Also, the beach parties were great!  But as said before already, don’t get on other people’s boats, Thai prison cells are even worse than Taco Shacks’ toilets. Don’t forget about #TeamTaco and Mr. Sleeping Guy (Sorry for waking you up all the time!).

Definitely the best place I have ever stayed at. It’s not about luxury but about the people you meet. And I met some of the best people while traveling through Israel and especially in Jerusalem. I came from Tiberias in the north east where I met another German girl taking the same bus, who was on some kind of spiritual voyage, talking about the Bible, God and so forth. I am not really religious (I am more now than I was back then, but still), but she was really nice. Since I did not get any hostel until then I just came with her to Abraham’s, which was the best thing I could do. The hostel was nearly full, but the receptionist took some time to check if there were any cancellations, so I could stay there. My first plan was to stay only for three nights, since I wanted to have some more time for Tel Aviv’s nightlife, however, I extended to 5 or even 6 nights. By the way, it’s voted one of the best hostels in the world!

The reception was in a rather small entrance hall, but on the upper floor there’s a big lounge, kitchen, bar etc. This was really great! The hostel was quite big with a lot of guests, so it wasn’t any problem to get to know people. Still, it was big enough so you could take a nap without being interrupted.

My top highlights were definitely the hummus cooking class (If you are ever in Germany, let me know and I get you the best hummus outside of the middle east on the table, promised!) and the Passover Seder dinner, one of the most important Jewish feasts, where really most of the guests gathered and ate together, while being introduced to the feast and its background. I’m very happy that I extended my stay, so I could be part of this, which was really cool. Did you ever have dinner with around 60-80 other people you didn’t know before? Well, at least once you should!